WhatsApp has gathered a massive amount of users within a short span of time. It is the wide popularity that attracted Mark Zuckerberg towards the platform. Ever since Facebook acquired the application, we have been seeing several major and minor features coming into it.

About a week ago, WhatsApp announced that the backup data will not be counted within the 15 GB free Google Drive quota. In the FAQ page, the company has clearly written that the end-to-end encryption is not available for backup data. 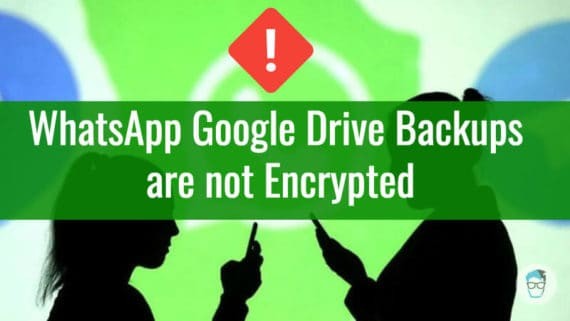 We all know the importance of backups. Whenever our data goes into oblivion due to some strange reasons, we can recover the same within a blink. We have important conversations on WhatsApp that we are afraid to lose. If we take the backup, it will help us get the same chats even after losing the phone itself.

Google Drive has a 15 GB free data allowance. Means, users can store the data up to 15 GB without paying even a single penny. Earlier, they counted WhatsApp backup file data for this. However, the company announced on August 16 that we can store the backups without burning off the quota.

Now, the shocking revelation has surfaced on the web. WhatsApp itself has published it on their Frequently Asked Questions page. The company doesn’t offer end-to-end encryption for those backup files on the cloud.

You might have become familiar with the end-to-end encryption WhatsApp implemented years ago for the conversations. It simply means even the platform officials can’t read our messages. The only people who can read the conversations are the parties involved in messaging.

That doesn’t indicate our data is completely insecure. WhatsApp and Google have separate encryption methods to protect our data. However, we have to change the data from Facebook servers to Google servers. And, down the line, there is a chance for anyone to exploit our backups.

If you believe in strict privacy policies, you will have to think twice before backing up your WhatsApp chats. You must find an alternate way or just don’t do it at all. The second solution may not be feasible for those who fear to lose the data.

On the other hand, there is a new argument that the lack of end-to-end encryption allows the companies to share the data with the government in case of any national emergencies. We are not sure whether or not the tech giant will get ready for that.

The parent company, Facebook already went on the news due to the controversial Cambridge Analytica case. So, they have to stay out of such issues to be on the safe side.