Oppo has chipped into the trending release of Avengers Endgame with a new smartphone launch. To be clear, this is not a new smartphone but just the Oppo F11 Pro which has already been announced. However, the company has launched a new edition of its flagship F11 Pro in India.

As far as Oppo F11 Pro’s latest Avengers Edition is concerned, there is nothing new in the smartphone from the regular variant. However, this smartphone is exclusively made for fans of Captain America and Avengers. This is because you get various goodies which will be cherished by the fans of Avengers franchise.

As a bonus goodie, you get a ‘Collection Certificate’ which is stamped with logos of Avengers’ characters such as Thor, Iron Man, Hulk, and others. On the software side of things, you do get a new Avengers-themed Wallpaper as default on this variant. Apart from that, the storage on this edition has been bumped up to 128GB. 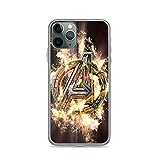