HTC has unveiled its flagship device, HTC U 11 earlier this month with impressive flagship specs and awesome features including Edge Sense. Now, the phone with a model number, HTC U-3w has been tested on Antutu and scored an impressive 176511. Interestingly, the same model number has been listed on GeekBench too. The GeekBench listing shows a Snapdragon 835 chipset combined with 4GB of RAM. The phone runs on Android 7.1.1 Nougat. The device scored 1899 on the single-core test and 6173 on the multi-core test. This is not for the first time when the HTC U 11 has appeared on Antutu and GeekBench. The phone has already up on these benchmarking sites, but with a different name, HTC CBP. 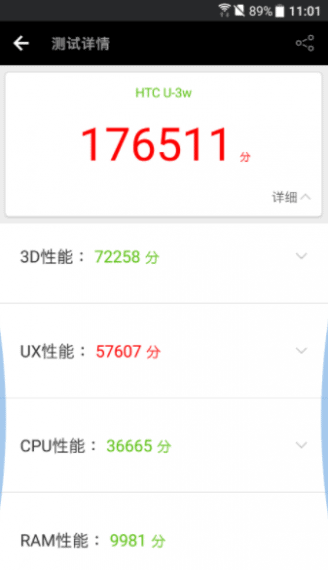 As far as specs of the HTC U 11 is concerned, the phone sports a 5.5-inch QHD display backed by an Octa-core Snapdragon 835 chipset combined with 4GB of RAM and 64GB of native storage. Camera-wise, the phone flaunts is a 12-megapixel and a 16-megapixel selfie snapper. The HTC U11 packs a 3000 mAh battery with fast charging capabilities. The HTC U11 has got a USB Type-C port but lacks the 3.5mm headphone jack. Priced at $649, the phone will be available for sale from June 9 onwards in different parts of the world.