Huawei has globally launched Honor View 10 aka V10 last month at an event in London. The company already confirmed its arrival to India in January. However, they have kept their silence when it comes to the pricing.

A newly launched tech site, OnPhones could pull out the pricing details of the device from the official store itself. The owner even reached out to the company via Twitter and they confirmed V10 is going to hit the market for Rs. 39999.

As told earlier, company’s HiHonor store put the price tag as Rs. 39999 that seems a bit off-putting given the pricing of their previous flagship. Honor 8 Pro (the last Honor flagship) went on sale for a price under 30000 INR.

The company already started taking registrations for the device. Once the news about the pricing went out, they have removed the pricing from the page. However, when asked about the same, the company officials have confirmed Rs. 39999 pricing for View 10 via their Twitter handle. 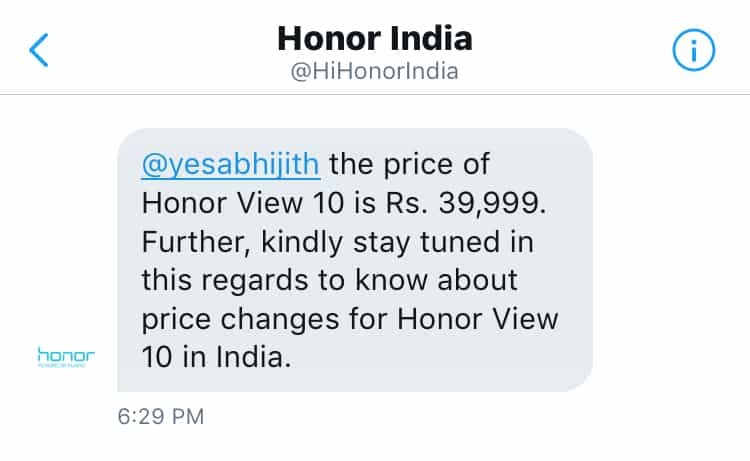 Huawei has planned to launch V10 as an Amazon exclusive. Nonetheless, you can also buy it from their official store as well. On a side note, we didn’t get the opportunity to have Honor 9 in India.

To recall, Huawei has launched Honor V10 with a 5.99-inch FullView near bezel-less display having a full HD+ resolution. Under the hood, they included the in-house Kirin 970 chipset coupled with 6 GB of RAM. For space hungry phone buffs, the phone features SD card support up to 128 GB apart from the 128 GB internal storage.

View 10 comes with a hybrid slot. Meaning, you can’t use two SIM cards and a micro SD simultaneously. It might not be a deal breaker given the whopping internal storage the phone offers.

For the optics, the device sports a dual rear camera setup with a 16 MP RGB sensor and a 20 MP monochrome sensor. The company claims they have integrated artificial intelligence technology to the camera, which recognizes different scenes and optimizes the snaps. Up front, it has a 12 MP AI-powered selfie camera.

The smartphone packs in a 3700 mAh battery with fast charging support. You will also get Android 8.0 out of the box with the phone.

We have got no clue when the device hits the market. The rumors tell it will happen on January 8th.

What do you think about the pricing? Is it too high for the features you get on Honor V10? Or are you happy to see Huawei going with Rs 39999? Let’s know in the comment section below.