Launchers are a great tool to make your Android smartphone look according to your preferences. Apple, on the other hand, restricts users to make any changes in the User Interface. Because of that, many iPhone users are stuck with one type of User Interface until a new official update is out. The main work of launchers is to make your main menu, lock screen, icons, navigation bar, and many things according to your liking.  Some launchers have the ability to mimic the features of certain User Interfaces that you may not normally find. Some people like a simple Android launcher that just gets their job done, like the Pixel’s launcher. So, for this article, I have collected a list of best Android launchers to customize your Android phone home and lock screens.

Best Launchers You Can Use For Your Android Phones

The following is the list of the best launchers that you can find for your Android device. A few launchers mentioned in the list are free to download with limited features. However, they include in-app purchases or subscriptions to unlock more interesting features they offer within the app. So, it is always recommended to try the launcher on your Android device first and if you are happy with the new look and features, you can consider upgrading to premium version by paying for the one-time in-app purchase or monthly subscription. 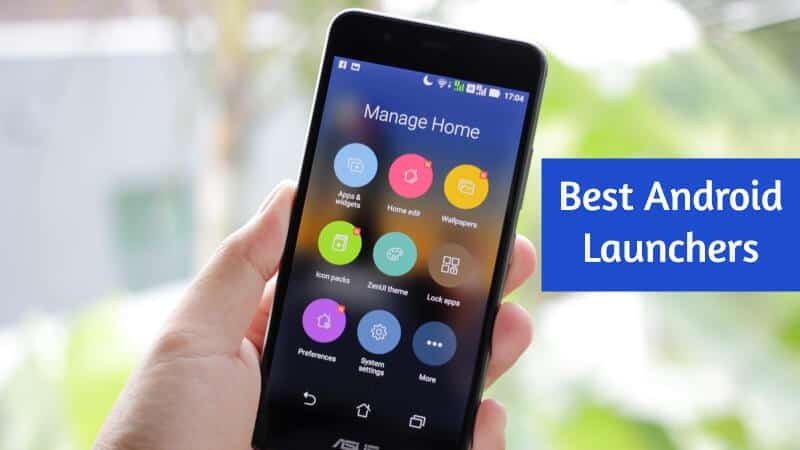 Being said that, let’s get into the collection of best launchers for Android:

Nova Launcher is considered to be one of the best free Android launchers that a user can have on a smartphone if he/she wants to have a lot of customization options along with some clean looking UI. It has a rating of 4.6 stars and it is so because of its flexible options and the ability to edit the User Interface in a way that a normal Android UI wouldn’t let you do. 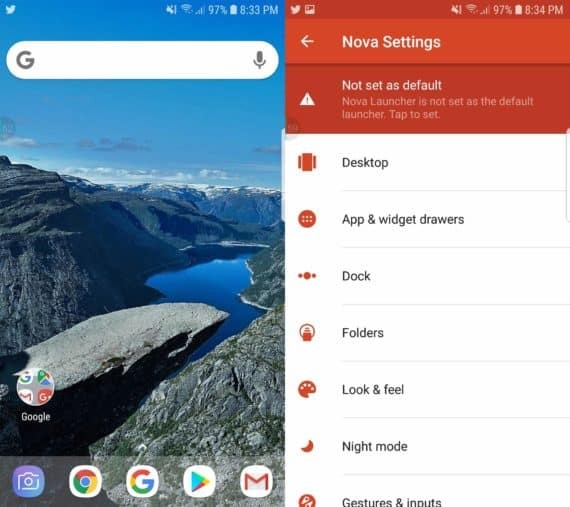 Features: Number of options to customize, has features that regular UI does not have
Availability: Nova Launcher is available for Android in Google Play
Price: Free, but comes with a Prime version costing Rs. 99 (~$2)

Pros: A lot of options to customize the UI, easy-to-use
Cons: Some features are available in the paid version

Evie Launcher can be considered as the fastest Android launcher on the market which includes some of the features that Nova Launcher Prime has without any cost. It has features like the ability to change the icons, adding gestures, changing the style of your app drawer, adding custom shortcuts and wallpapers, and many more. 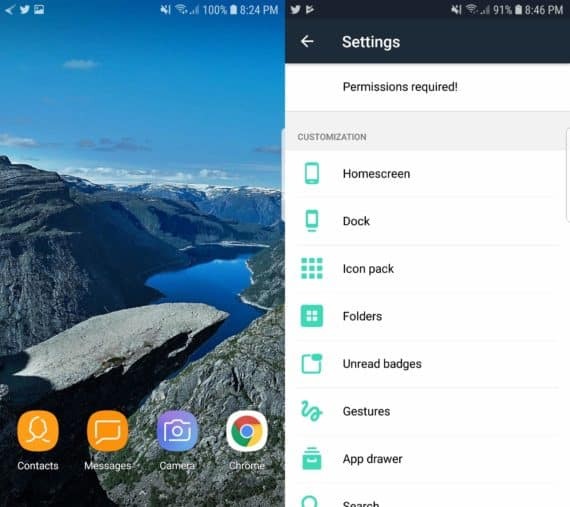 Pros: Simplistic UI, various ways to tweak the UI
Cons: Some users report it being a slow launcher

Another launcher that has many great features is the Microsoft Launcher. It is a simple Android Launcher which has a lot of capability. The wallpapers are some of the best it comes with along with the features like the timeline option, the ability to organize your schedule, and much more. 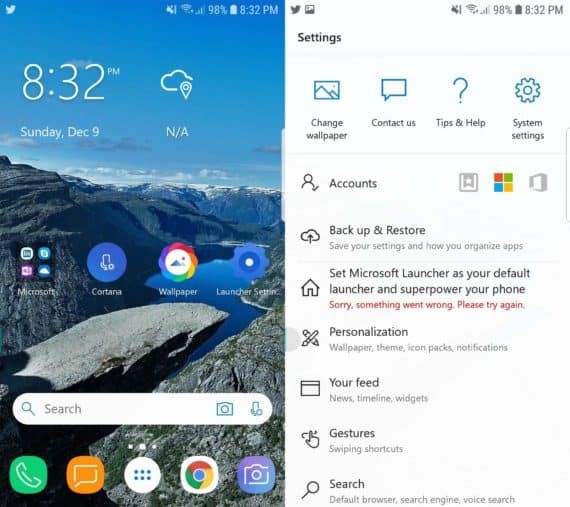 Pros: Simple and easy-to-use launcher with minimalist UI
Cons: Some may find the UI unresponsive and weird

For those users who love the traditional Android look and also want some ability to customize the UI and make the feel of the device similar to a Pixel device, then Action Launcher is for you. This launcher has some great features that closely mimic the Pixel devices like the Glance widget which is basically the 3D Touch version of Android along with the other features that all the above launchers had. 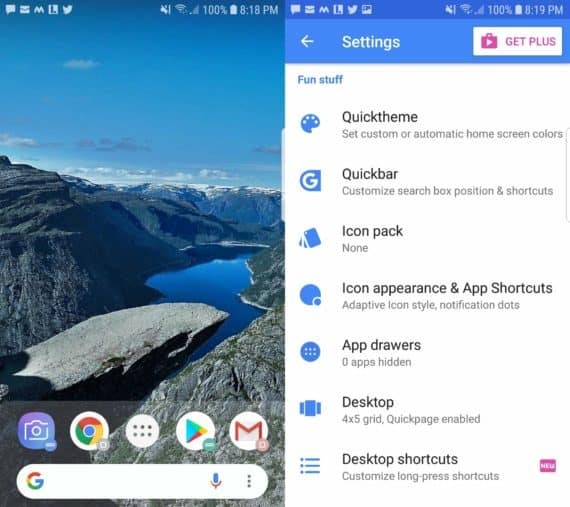 Pros: Great for Pixel lovers, Smooth UI
Cons: Some features are not available in the free version 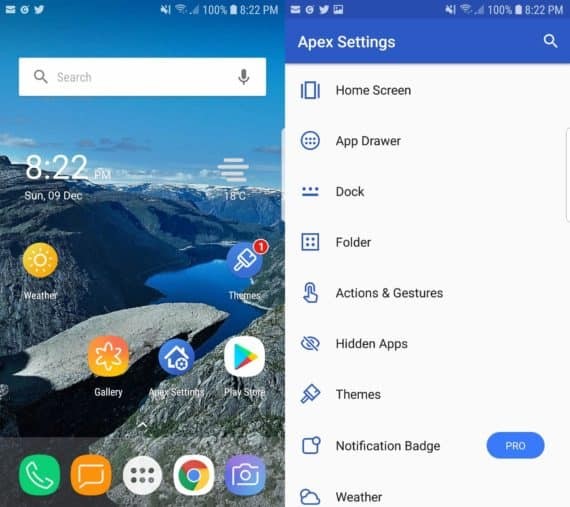 Pros: Works like a charm and has the ability to make the UI more stock-looking
Cons: Frequent bugs makes it unusable

If you guys are into some funky and color-popping launchers, then the Smart Launchers is definitely made for you. This launcher offers extensive color options to make your smartphone look a lot more colorful. It also has the ability to change the icon’s shapes and design along with picking your favorite widget and wallpaper from an extensive range which many people would prefer. 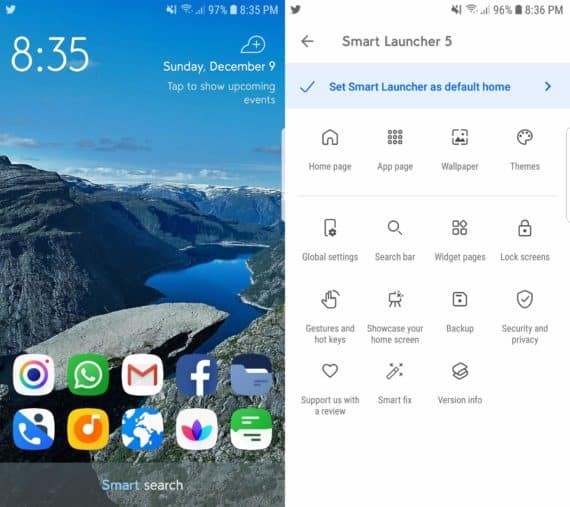 Pros: Extensive options available to make your device filled with color, easily customizable
Cons: Some of the very useful features are paid

If you are into the 3D launcher for Android devices, then you might like the CM Launcher 3D from Cheetah Mobiles. As the name suggests, this launcher’s main highlight is the ability to have 3D effects like animations, wallpapers, themes, widgets, and many more. It also has a smart app manager and secure folder to hide the stuff if you want to keep it private. 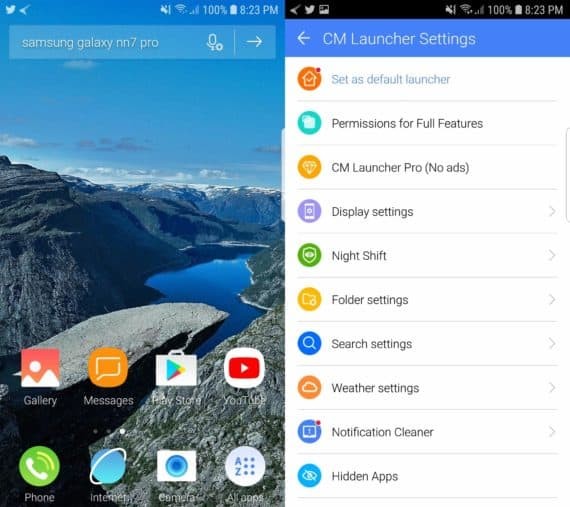 Pros: 3D effects in the launcher is good, provides a secure folder and smart app manager
Cons: Some people may not like the UI as it looks quite unusual

ADW Launcher 2 is a launcher which has a ton of customization options which are beyond the lines of any launcher in this list. It has all the basic customization options that you would find on any launcher, but that’s not it. It comes with its own wallpaper editor, where users can edit the wallpaper according to their preferences. Other than that, it has many other additional features like adjusting the scroll options, swipe options, and much more. 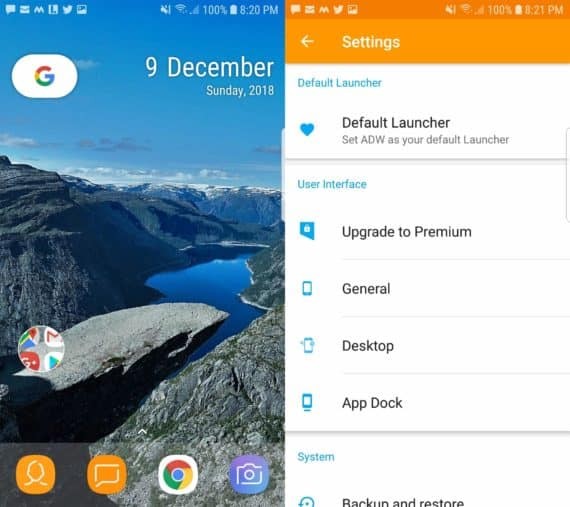 Features: Ability to edit wallpapers in the app itself, various options to edit ranging from swipe to badge icon color
Availability: ADW Launcher 2 is available for Android in Google Play.
Price: Free

Pros: A lot of customizations options are present, Professional-looking UI
Cons: People with less knowledge about how it works may find it difficult to operate

Hola Launcher is yet another free Android launchers that come with additional software tweaks. Along with the launcher, this launcher also has a built-in battery saver, app monitor, and all the things that a smartphone cleaning app would have. Other than that, the launcher is good with many options to customize the UI and feel of the device. 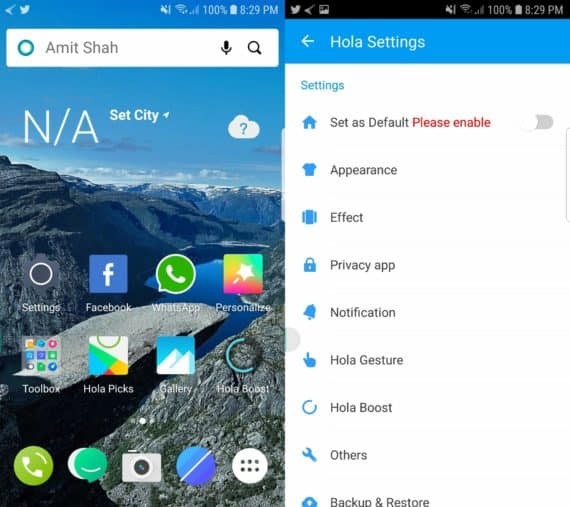 Pros: Launcher with built-in smartphone assisting functions
Cons: It looks like the app is loaded with bloatware

If someone still loves the look and feel of the old and forgotten Windows smartphone and the way its launcher worked, then you might like the Square Home 3 Launcher. Its UI is very similar to a Windows device, with the tile-style menu with quick settings in the menu itself. 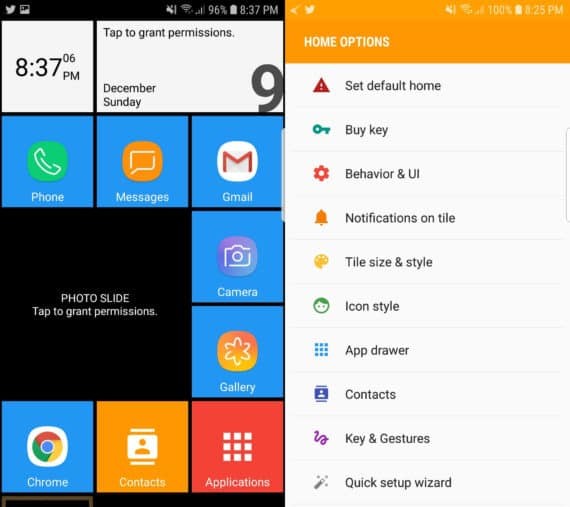 Features: Tile-style menu bar with settings on the menu itself
Availability: Square Home 3 is available for Android
Price: Free

Pros: It brings back the nostalgia of Windows Phones, Minimalist UI
Cons: Some may already dislike the Windows-style UI

To conclude this article, I would say these top Android launchers are a great way to customize your Android device without having to do much effort. As I said, some people want to mimic the feel of other device’s launchers without purchasing the device. Some people do it for the functionality that it offers like the ability to edit certain features according to their preferences. For some people, a simple Android launcher is also enough to get their job done. Do you have any suggestions of any launcher that I might have missed? Please leave them in the comments below to let other people know how awesome that launcher would be.