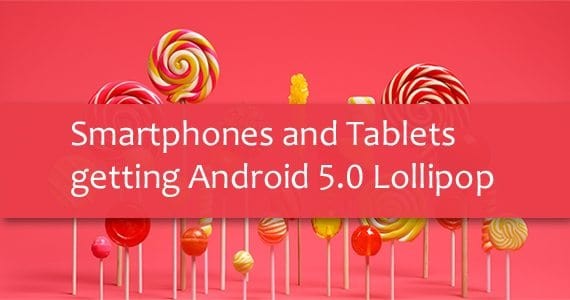 The list mentioned in this page is not complete and we are trying to update this list based on official announcements. People who are using below mentioned devices will proudly say “I have Lollipop in my pocket” in coming days.

LG haven’t made any official announcement regarding the LG devices getting Android 5.0 Lollipop update. However rumors says, these devices are expected to get the update later.

After Google acquired Motorola, shocking devices are being released with jaw dropping pricing. It started with Moto G and later Moto X, Moto E and now 2nd Generations of Moto G and X. All these Motorola devices are getting Android 5.0 Lollipop update by the end of this year.

Whenever there is any update for Android, Nexus devices stands first in the race. Rolling of updates starts from Nexus. Here are the nexus devices that will get Android Lollipop update in coming weeks.

One Plus one is the only device in their list and it will get the Android Lollipop update by the end of January 2015.

Samsung disappointed their users this time a lot. They haven’t made any official announcement yet. Here is an expected list of Samsung smartphones and tablets getting Android lollipop update. Please note this list of Samsung devices is just a wild guess.

Sony officially stated that all their Xperia Z devices are getting the update. Here are Sony Smartphones and tablets that will receive the latest Android update.

We will keep updating the list when we get any conformation news. Let us know whether your device is in the list or not. If you can’t find your phone above, comment with your device model number and we’ll let you know the current status.