Acer Nitro 5 is a new gaming laptop from Acer officially launched in India. The main highlighting feature of this newly announced gaming laptop is its GPU. The Nitro series from Acer is a gaming series of laptops at affordable pricing.

Acer has used a high-end Nvidia GeForce GPU on this laptop. Under the hood, a 10th gen Intel chipset on the internals. This laptop is a perfect match if you have a tight budget but in need of high GPU performance.

The manufacturer is claiming that it is the first gaming laptop in India to feature this new GPU from Nvidia. The design aspect of the Nitro 5 is very similar to the previous-gen models. Besides, the newly launched laptop has thin bezels and a plastic body in the build quality department. Moreover, the gaming laptop market is ever-growing since the start of e-sports, and many AAA titles launching substantially at a higher pace.

The laptop has up to 16GB of DDR4 RAM with dual-storage options that include a 1TB 7200-RPM and a 256GB PCle Gen 3 NVMe SSD. The battery cell used on the Nitro 5 is a 57.6WHr that gives 10Hrs of battery life. The 180W charger provided right in the box charges the battery. Other features of Nitro 5 include a 720p HD webcam and DTS HD stereo speakers.

The cooling technology on the Acer Nitro 5 is dubbed as CoolBoost technology. This technology will help the laptop to manage system temperature for enhanced gaming performance. Acer has provided a dedicated NitroSense software and a key that controls performance parameters.

There is no fun in a gaming machine without RGB lighting and Nitro has it as well with 4-zone implementation on the keyboard. The keyboard has a 1.1mm key travel.

Other Connectivity Features and Pricing

The prices for the Acer Nitro 5 are Rs 89,999 for the 8GB RAM variant. The laptop is available for sale on Amazon India’s official website. There are a bunch of discounts and cashback offers provided for the Nitro 5 on Amazon. 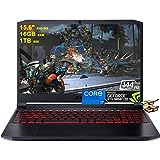 How to Update All Drivers in Windows 11 Quickly

10 Best Windows 8 Apps you should install on your Computer