WhatsApp developers have been working hard to bring new features to the platform. We have been getting subtle new functions almost every week. Ever since Zuckerberg acquired WhatsApp, they are frequently releasing major and small features.

The latest addition to the instant messaging platform is the ‘Forwarded’ label. If you send forward a message to anyone on WhatsApp, they will see a Forwarded label at the receiving end. 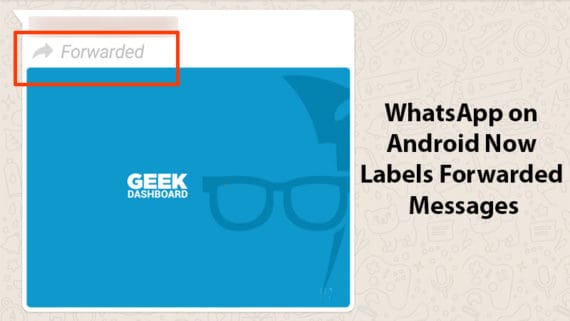 The feature surfaced for those who updated their application to 2.18.179 beta version. You will have to sign up for the beta programme to get access to all the new features they roll out. The company doesn’t make them available at once on the stable version.

As you already read, when you forward a message, the person at the receiving end sees a Forwarded label. You know the application has become a swarm of dares, trolls, memes and good morning messages. The company might be thinking they could eradicate the widely circulating messages up to a minimum extent.

In our testing, we have found out that the label works for both texts and media messages. In case you are a person, following the forward message habit, you don’t have to worry a lot at the moment. The feature has only found its place on the beta version. In short, users who are not on the latest beta build can’t get this feature.

The feature hasn’t made its way to iOS or Android as well. We hope they will release it widely for the stable version very soon. If you want to identify the forward messages from regular at your end, you can sign up for WhatsApp beta programme on Google Play. Sometimes, they won’t take new subscribers. In such a scenario, you can download the exact version from any reputed APK downloading sites.

What if you don’t want your receiver to see the Forwarded label? Well, you generally select a message and tap on the right-headed arrow to forward. Following the same way generate the label at the other end. Instead, you can copy the message and paste it on the sending screen. For media files, you can directly send them from the gallery. In both these instances, WhatsApp avoids the Forwarded label to sneak into your messages.

You know? You can now lock voice message recordings on WhatsApp. And, the team is working to make new features live as well. What do you think should be the next new option? Let us know in the comment section below.