uBlock and AdBlock are the two most impressive AdBlockers to get rid of annoying ads. People choose uBlock over AdBlock and vice-versa based on requirement. Ads generate income for tech giants like Google, Facebook etc. Let it be. But we have decided to put a full stop for that. We don’t want any distractions, whenever we are surfing or downloading something. Let’s dig deep into various aspects of uBlock vs AdBlock and choose the best one to block non-sense ads.

The following are the various differences between uBlock and AdBlock 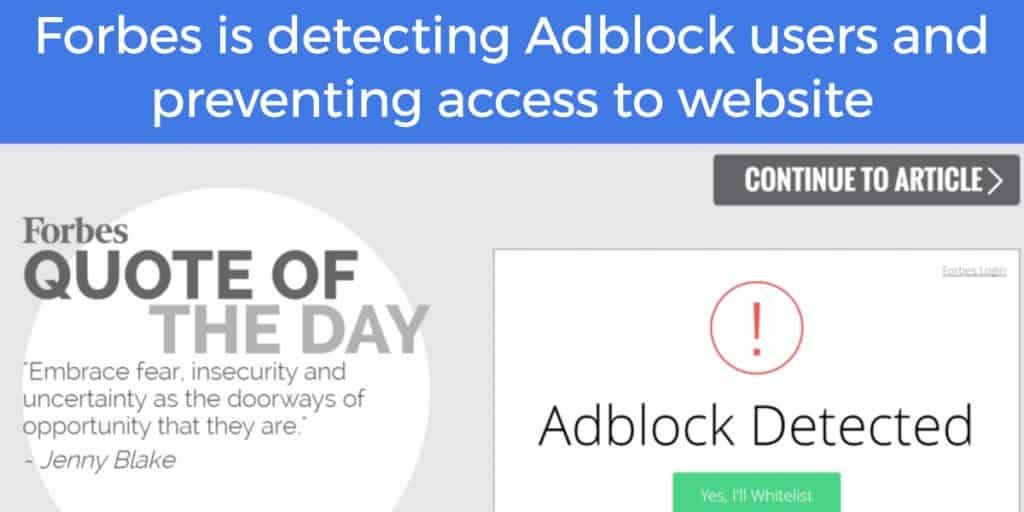 It is very usual that website owners disable the content for using ad blockers. This is the matter of survival for some people. Hence it is highly likely to use AdBlock detector scripts on page load. Can uBlock and AdBlock go undetected? No, it’s not. Both of them belong to the category of ad blockers, even though uBlock don’t mean it completely.

Efficiency is of paramount importance to the users. If any adblocker failed to block annoying ads, then it can’t sustain in the market. Let’s illustrate a simple experiment conducted to measure the efficiency of both the adblockers.

A random URL of no choice is taken for the experiment. Here are the screenshots without any ad blockers, with uBlock and with AdBlock respectively.

Privacy seems to be the paramount importance of the AdBlock (as stated on the official website). But uBlock didn’t mention anything about privacy on official site. This seems a bit suspicious, as we can’t take anything for granted.

Verdict – AdBlock gets a slight margin in this aspect.

UI seems simple in uBlock when it is kept open. But it lacks the details. Most of the people won’t bother about the details. User interaction takes at most priority. While using the AdBlock, pausing and unpausing the ads seems very easy. This is because of the auto-refresh feature of AdBlock. Unlike AdBlock, uBlock needs a click on refresh icon.

Verdict – When it comes to uBlock vs AdBlock, AdBlock wins the contest without any hesitation.

Updating itself to the user requirements is one of the decent quality any software possess. A software without any update will be either crippled or perfect. Having said that, a perfect adBlocker is yet to be available in the market. AdBlock is the only software that is next to perfection as of now with frequent updates and great audience understanding.

The most recent update of AdBlock was found to be on August 14, 2017, while the other was happened to be on June 2, 2015. So as of now, the software that is updated long back seems to be less trustworthy.

As a general user, one may not be concerned about the changing the default settings. But as a pro user, one will try to fiddle with the settings. Hence uBlock is the perfect place to optimize the settings, considering the massive options provided by it. AdBlock seems pretty unlucky here.

Verdict – uBlock clearly had an upper hand in the aspect.

Verdict – AdBlock outsmarts its competitor by a great margin.

Most of the people are desperate in rating in two situations. One is lost and the other is the gain. Either awesome or awful will reflected on the rating. Since chrome seems to be the most popular browser, the rating on the chrome store happened to be 4.55 stars for AdBlock. Unfortunately, the competitor has 3.8 stars.

The number of users is taken priority when it comes to relevance. Most downloaded and most used software can sustain forever in the market. This is the same with AdBlock. With over 40 million downloads and 10,000,000+ users, AdBlock clearly outsmarts the opponent.

Yeah, Size matter a lot. Anything of lesser size and more productivity is highly entertained. To be precise, the size of AdBlock is 1.67 MiB. The size of uBlock is 2 times greater than AdBlock (3.54 MiB).

Verdict – The clear winner is AdBlock.

Interesting read: Reddit discussion happened on the recent poll about uBlock Origin vs  AdBlock Plus (conducted by Firefox). Get key insights from way back war between AdBlock Plus and uBlock origin on Reddit.

After the complete understanding of the differences between uBlock and AdBlock, let’s put an end to uBlock vs AdBlock. With more than seven wins, AdBlock seems to be a standout performer.

Analysing those critical aspects where AdBlock lost, uBlock seems to be exceptional. Choose the aspects which are critical to you and consider our verdict for that. You must end up this war (uBlock vs AdBlock) and install the one which suits your purpose.