Tumblr, the microblogging platform owned by Yahoo is the latest addition to the row of apps that offers filters. Snapchat became outrageously famous for their amazing set of filters. Then, Instagram came up with the same. And, now it is Tumblr’s turn.

The ardent Tumblr fans have got latest reason to cheer up and keep using it. The company has revealed the availability of both stickers and filters officially on yesterday, on 24th January.

Tumblr Brings Stickers and Filters to its Mobile Apps 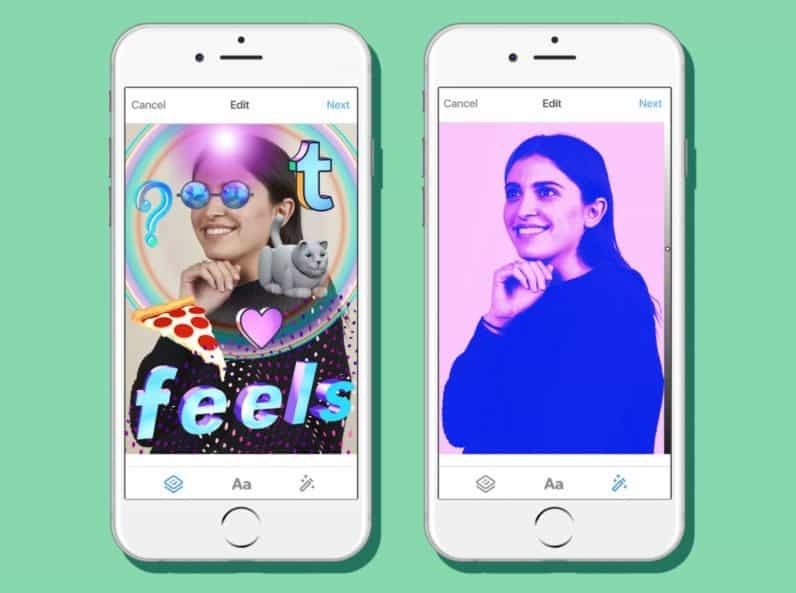 As you just read, you can’t apply both the features on the desktop version or the mobile website. In order to get access to the set of stickers or filters, you must use their mobile app.

We all know the fact that Yahoo is in the loss. But it didn’t affect Tumblr users. Quoting a report based on the study last year, it has about 500 million monthly users. That’s why once-a-tech-giant-and-now-a-diminishing-company decided to introduce something new for their loyal users.

If you are a Tumblr user, who wants to get these features, you have to update the official app first. In case you have turned auto-update on, there’s nothing to worry about.

After the update, when you create an image or GIF on the mobile app, you can see a face icon on the bottom of the screen. Tapping on the same leads you to the impressive set of stickers. For the first run, they haven’t come up with many. The numbers go slightly over a hundred. There are objects, sunglasses, symbols and common expressions like OMG, YES as well.

You can scroll through all the stickers. The developers didn’t arrange them into different packs given that there are not many.

Tumblr revealed that they have a plan to release temporary stickers for special occasions. And, it will encourage the users to check the app often. You can expect exclusive stickers for Valentine’s Day.

The Tumblr filters also work in a similar manner. When you are on the compose screen, hit the magic wand icon on the bottom to get the list of filters. Unlike other social media apps, Tumblr chose to introduce filters that make photos look new, rather than adding an enhancement effect. The bold and color brightening traits produce art-like images.

You can apply both stickers and filters on GIF and static images. In case you don’t want to share the outcome on Tumblr, it is possible to save to your internal memory as well. Later, you can share it with anybody you want, on any platform.


The speculations suggest that Tumblr came up with a monetization strategy with this update. We can’t deny it. They may introduce paid stickers in future, just like LINE.