WhatsApp, the most popular instant messaging platform allows users to sign up for their beta program. As a beta user, you can get access to every new feature they are planning to bring on to the stable version.

A few days ago, we have reported the timestamp bug on WhatsApp Beta for Android. You know, as a stable version user, you might not have seen the bug.

We accidentally came across the bug on WhatsApp for Android Beta version 2.18.109. It had gone live on Play Store on April 12. While we were on a casual chatting session, the weirdness of the timestamps has struck our chord.

WhatsApp Beta 2.18.109 was showing TODAY as 84ODAY and YESTERDAY and 89ESTERDAY. In case you are wondering about the occurrence of the numbers, we have shared that the American Standard Code for Information Interchange (ASCII) for T is 84 and Y is 89. 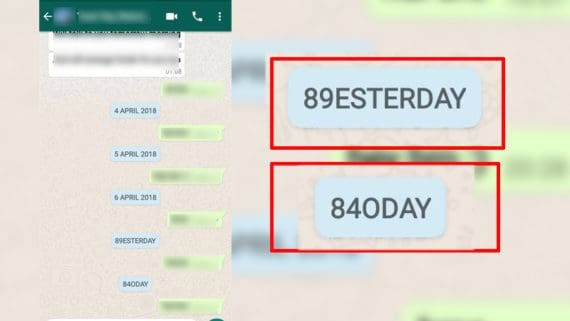 Although this small mishap didn’t affect the chatting experience, it was awkward to see the weirdness all over the platform from Statuses to conversations. Seeing the fuss, we figured out that they are using a common static method to convert the timestamp to the required format.

As you read earlier, the version hit the store on April 12, Thursday. We have spotted it and published an article on the next day. Apparently, the news reached the ears of WhatsApp officials and they released 2.8.113 version with the fix for the timestamp bug.

What if you have updated the application to 2.18.109 and still couldn’t get to the next version (2.8.113)? Well, you can use this link and download the latest WhatsApp beta build. Moreover, you can also do a simple Google search with the build number to get the APK file. You must use genuine APK sites only. Or else, the privacy and security of your device might be compromised.

About a week ago, we have reported the voice record locking facility, which came to beta version 2.18.102. As you already know, you would have kept the button pressed to continue the recording. With that update, they have brought a new feature, which displays a lock icon just above the record button. When you drag the mic to the lock icon, you can free the hand and keep the record going.

You know, WhatsApp has been getting new features since long. Are you waiting for any new features? Don’t forget to share with us in the comment section below.