Heard about the new Snapdragon 660 and 630 processors?

Want to know the different between Snapdragon 660 and Snapdragon 630 processors? Then this is the guide you are looking for.

Let us peep into each difference and analyze which Qualcomm Snapdragon should fit into your next budget smartphone. 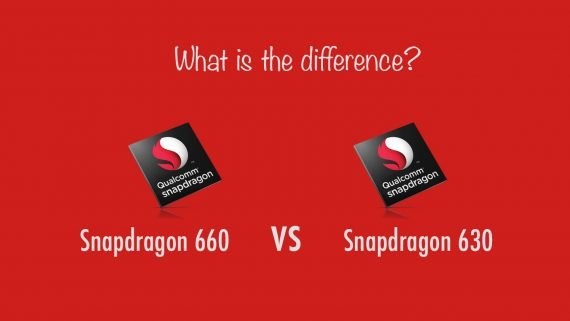 From the time, the ‘Core’ technology was introduced, there has been drastic improvement in the processing speed. CPU cores are nothing but the logical division of CPU into n number of processors which can process n times faster than a single processor.

Generally, the processors or CPU are named with number prefixes like dual-core, quad-core, octa-core, hexacore, and deca-core etc.. A dual core CPU is a single CPU (physically), which is logically capable of working like two independent CPUs. Similarly, quad-core indicates four independent CPUs and so on.

Qualcomm slowly tending to Kryo CPU leaving behind the third-party ARM Cortex processors, as Kryo was designed by Qualcomm for self-purpose. This significantly improved the performance of Snapdragon processor and results will speak about it. One of the latest Snapdragon processors from 800 series, Snapdragon 835 was featured with 8x Qualcomm Kryo 280 CPU. Qualcomm 660 wins the battle between two different processors.

Fortunately, Snapdragon 660 falls under the category which uses HVX which is lacking feature in Snapdragon 630.

Verdict – Qualcomm Snapdragon 660. HVX seems must and should

DBS [Dual-Band Simultaneous] is the technology in which both the bands of the Wi-Fi routers i.e. 2.4 GHz and 5.0 GHz are simultaneously utilized for data transmission. Snapdragon 660 beats 630, as 630 lacks this feature. Sharing of LTE network over Wi-Fi and Bluetooth connectivity has been a unique feature to Snapdragon 660 which is missing in Snapdragon 630.

Verdict – Qualcomm Snapdragon 660. All these features together certainly makes the difference

The significant variation between Snapdragon 660 and 630 was shown in the display. On-Device display support includes compatible screen size, resolution and mode of display.

Verdict – Neutral. Since mid-range budget smartphones can’t zoom into this feature that much

GPU is the Graphical Processing Unit, often called as Visual Processing Unit is an electronic device to power up visual graphics and image processing. The usage of GPU ranges from embedded systems to massive gaming consoles and Smartphones find its way in between them.

Verdict – Neutral. Since implementation is not on high-end will certainly suffice mid-rangers

Both the Snapdragon processors can provide stunning mobile security with a smart camera, App protection with Qualcomm Processor Security. But Snapdragon 660 had an added advantage of hardware token. Hardware token is the one hardware compatibility which can read biometrics like thumb impression for unlocking the screen, digital payments etc wherever you need a password. Snapdragon 660 held an upper hand in providing security support.

Bonus: We have already covered the difference of Snapdragon 821 and 820. You can find it here.

Final Verdict about Snapdragon 660 vs 630

After the detailed analysis of Snapdragon 660 vs Snapdragon 630, one can surely go with Snapdragon 630 if they are least bothered about the security, memory speeds, and next-gen Wi-Fi technologies and power packed processor. As a smartphone user, we don’t want to compromise on any of the above and hence our recommendation was Snapdragon 660 without any second thought.