The South Korean giant Samsung is working on its second foldable phone. The company has already launched a couple of smartphones this year. However, it’s is still to unveil its flagship S20 and the rumored Galaxy Z Flip. The smartphones are expected to be launched at the company’s Unpacked event, which we already covered previously.

The Samsung Z FLip leather case cover support page has been listed on Samsung’s official Romanian site. The page confirms that the second foldable phone should be called the Galaxy Z flip. The leather case page is still live on the site and might takedown in the future. You can see in the screenshot below.

The support page clearly mentions the Galaxy Z Flip. The listing also suggests that the Z Flip will have a leather case option, which will be sold separately by the company. However, the image attached to the page is broken. The page also has a specification link, which apologies after clicking on it.

Well, we already talked a lot about the S20 series. The S20 has already been quite a number of times in the images and videos. However, we haven’t heard too much about the foldable phone from Samsung till now. The smartphone leaked in a hands-on video that shows the complete smartphone.

Tipster Ben Geskin posted a short clip of the Z flip. The video was shared on twitter. The hands-on video confirmed what we‘ve previously seen in the leaked images. In the video, he showed how the smartphone works. However, the smartphone doesn’t appear to be the slimmest phone. 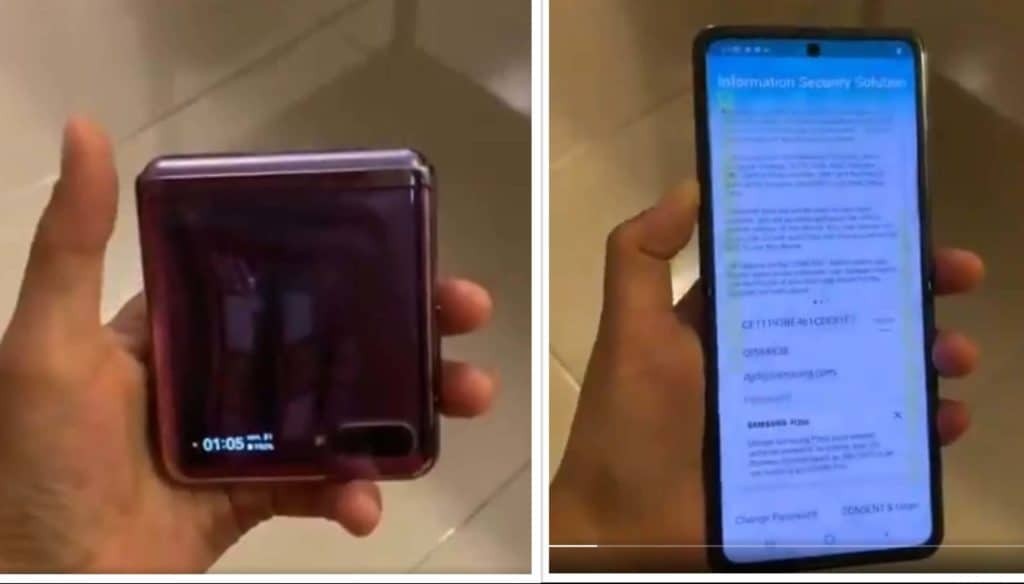 While looking carefully at the video, it’s clear that the device will sport a dual-camera at the back and a punch-hole camera centered on the front. The backside or the outer side of the phone do have a smaller display. But its too smaller than the moto razer. However, as it appeared in the video it looks like it only shows date and time or maybe notifications?

While the leak doesn’t reveal any specification of the device. But thanks to the previous leaks we have some idea about the hardware. The Z flip is rumored to feature a 6.7-inch HDR10+ infinity flex screen. The secondary display at the back will be a 1.06-inch super AMOLED external cover display.

The device is said to be powered by Snapdragon 855+ SoC coupled with 8GB of RAM and 256GB of onboard storage and 3,300mAh battery.