Samsung Galaxy A22 5G has arrived in the 5G market of smartphones with a lot of competition in India right now. The device follows the typical design language of Samsung that features an Infinity-V display and camera aesthetics. Also, the 5G compatible device has even featured the high refresh rate panel on the smartphone.

Previously, the Galaxy A22 4G and 5G variants were launched at very aggressive pricing in Europe. The same follows in the Indian market, where the Korean manufacturer has launched the A22 5G to rival with Redmi Note 10 Pro Max, Realme X7 5G, and the iQOO Z3. Also, the device supports up to eleven 5G bands in comparison to others.

The device comes along with up to 8GB of RAM and 128GB of internal storage with expandable storage of up to 1TB via an SD card. The 5G Galaxy handset runs on the Android 11 Operating System with OneUI skin on top.

The camera module on the A22 is a triple camera setup consisting of a 48-megapixel primary sensor; a secondary 5-megapixel ultra-wide shooter, and a 2-megapixel depth sensor.

The front-facing camera on the device is an 8-megapixel sensor for selfies and video calling. Also, the smartphone has an assured two years of updates rolling out in the future.

Also Read: How to Bypass AdBlock Detection on Any Website Effectively

The connectivity options on the A22 5G include 5G, 4G LTE, Wi-Fi, Bluetooth, GPS/ A-GPS, and a USB Type-C port. Additionally, the sensors array on the device features an accelerometer, gyro, proximity, compass, and a side-mounted fingerprint scanner for security.

Also, the battery capacity of the Samsung Galaxy A22 5G is of 5,000mAh cell that supports 15W charging.

Although, many retail stores across the country will sell the device from July 25. As a matter of fact, Samsung will even sell the smartphone on Samsung’s official website and other e-commerce websites. 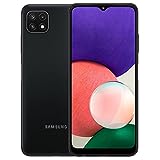