Realme has announced its new tablet dubbed as Realme Pad along with the successors for the Realme 8 series which are 8s 5G and 8i.

The newly launched Android tablet from the manufacturer is the most awaited product after a lot of teasing in India. Along with the tablet, Realme has announced the Realme 8s 5G and 8i smartphones at a mid-range under Rs. 20000 price point.

The Pad model of tablet from the company is their first entrant into the tablet market loaded with features. The tablet comes in two different variants that feature both Cellular and WiFi and the other being only WiFi.

Besides, the 8s 5G and 8i series of smartphones come with high-refresh-rate displays and a triple-camera setup. While the tablet features a single rear and front camera.

Realme Pad sports a 10.4-inch WUXGA+ display with a resolution of 2,000×1,200 pixels. The display supports a pre-loaded night mode that makes the brightness go up to as low as 2 nits.

Also, the display comes with a dark mode that is adaptive to external lighting and changes the brightness of the screen automatically. Under the hood, an octa-core MediaTek Helio G80 chipset powers the device.

The storage provided on the tablet is up to 4GB RAM and up to 64GB of internal storage with a storage expandability option with a microSD card.

Also Read: How to Take Screenshots on Android if App Doesn’t Allow [No Rooting Required]

Also, the design of the tablet is of an aluminum build that weighs 440 grams; with a thickness of 6.9mm. Besides, the camera section of the tablet comes with a single rear and front 8-megapixel camera sensor with a 105 degrees FoV.

The tablet can be a perfect option for media consumption; as it features four dynamic speakers that support Hi-res audio and Dolby Atmos.

Also, the microphone setup is not an exception; as the device supports noise cancellation while making calls or attending video conferences on the tablet. The battery pack on the tablet is of a 7,100mAh cell that supports 18W fast charging.

The Realme Pad tablet starts at a price tag of Rs. 13,999 featuring only Wi-Fi with 3GB of RAM and 32GB of internal storage. Besides, the same storage variant with 4G connectivity and Wi-Fi is priced at Rs. 15,999.

The higher-end variant comprising 4GB RAM and 64GB storage with 4G + Wi-Fi is priced at Rs. 17,999. Realme is bringing the tablet in Real Gold and Real Grey color options.

Firstly, Realme is bringing the 4G and Wi-Fi variants to the sale on September 16th at 12 PM noon via Flipkart, Realme.com, and other offline retail store partners in India. 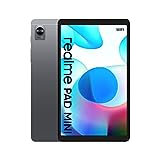 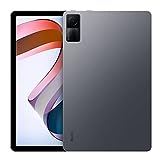