Realme Narzo 50A along with Narzo 50i has officially arrived with big ger capacity batteries and displays in India. Realme today held a virtual event at 12:30 noon launching the new Narzo 50 series; the new 32-inches Neo Smart TV, and the Realme Band 2.

The Narzo 50A features a MediaTek SoC and triple cameras whereas, the Narzo 50i comes with a Unisoc SoC and Dual Rear Cameras.

The device runs on the Android 11 operating system with Realme UI 2.0 skin on top. Under the hood, a MediaTek Helio G85 SoC powers the device along with up to 4GB of RAM and up to 128GB internal storage.

The storage is expandable with the help of a dedicated micro SD slot that supports up to 256GB of micro SD storage. Furthermore, the camera module is a triple camera setup featuring a 50-megapixel primary sensor with an f/1.8 aperture.

Also, the front-facing camera is an 8-megapixel sensor with an f/2.0 aperture for selfies and video calling. The connectivity options of the smartphone feature dual-band Wi-Fi 802.11 ac, GPS, Bluetooth v5, Dual Sim support, and, a USB Type-C port.

Also, the sensors array onboard comes with a side-mounted fingerprint sensor, accelerometer, proximity, compass. The battery capacity is a 6000mAh cell provided on the Narzo 50A with 18W fast charging support.

The device runs on the Android 11 operating system with Realme UI 2.0 skin on top. Under the hood, a Unisoc 9863 SoC powers the device along with 4GB of RAM and up to 64GB internal storage.

The connectivity options of the Narzo 50i include Wi-Fi 802.11 b/g/n, Bluetooth v4.2; a 3.5mm audio jack, and a Micro USB port. Also, the speakers on the smartphone are found on the rear panel of the device and the device has face unlocking instead of the fingerprint sensor.

Furthermore, the battery pack is a 5000mAh cell that supports Super Power Saving Mode which claims to provide 43 days of standby period.

The Realme Narzo 50A starts at a price tag of Rs. 11,499 for the 4GB RAM and 64GB storage version. The higher storage variant with 4GB RAM and 128GB storage is priced at Rs. 12,499. Besides, the color options for Nazro 50A include Oxygen Blue and Oxygen Green colors.

The device flaunts in two different colors, Mint Green and Carbon Black. Both the Narzo 50A and 50i are scheduled for sale from October 7 at midnight on Realme India’s official website and Flipkart. 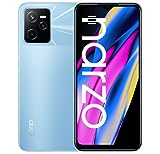 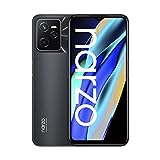