PC or Smartphone ? Sales figures revealed that smartphones have outsold PCs in the last quarter of 2011 by over 100 million units. It’s no surprise that smart phones have outsold PCs. These units themselves are ultimately mini PCs so to speak in that they can do things that PCs do and they have a more user friendly interface – it’s no wonder the public is gunning for them. 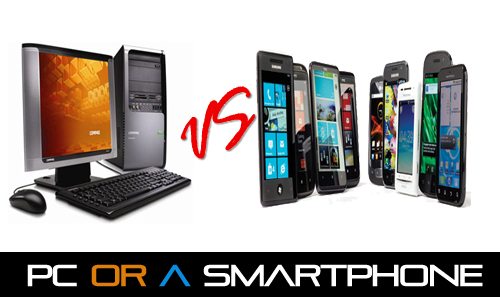 However, can a smart phone really replace a PC? It is true that smart phones such as the iPhone and the Android are undeniably useful for their ability to access the information on the go. They are great for receiving emails, for social networking and also the apps that allow a person to access information instantaneously and their ability to zone in on an area has proved most useful, for example apps for directions, local restaurants, bus times etc.

Advantages of PC over Smartphone’s

There are, however advantages of the PC to be taken into consideration that its survival might just depend upon. For one thing a PC does not have a battery that is going to die on you (usually at the most inconvenient time!) and you won’t be faced with loss of signal. Also, sometimes people simply prefer a bigger screen. For typing documents and looking at pictures, a PC is more user friendly than a touch screen and the graphics are usually better.

Consider computer games and online gaming although software has certainly come a long way in regards to graphics, online gaming at different sites on a hand held device can be even more engrosing.
If your battery were to die or if loss of signal occurs during a game your money and game/hand can be lost or a hand can be missed. This is a problem that has yet to be overcome by hand held devices.
For some people, the PC certainly has its purposes for the foreseeable future and with technological advancements of the PC, who is to say that its advantages over smartphones can’t see it through what could be simply put down to a ‘rocky patch’.

So, What’s going on your mind? PC or Mobile ?