Nubia has announced their latest gaming smartphones for the year 2021 in China. The Red Magic 6 Series is the successor to the previously launched Red Magic devices. The newly launched devices from the Chinese manufacturer have many improved aspects from the Red Magic 5 Series.

Even though the previous-gen Red Magic has support for 5G, it continued this year as well with the virtue of Qualcomm’s latest Snapdragon chipset.

Nubia has collaborated with Tencent Games to unveil a Tencent Special Edition that features 18GB of RAM in the smartphone. This device is the World’s first smartphone with 18GB RAM. The newly launched smartphones are also the first handsets in the world to sport 165Hz refresh rate screens.

Nubia will give a tough competition to other brands as they have included as many high-end specifications and features on their new devices.

The smartphone’s display can switch to 30Hz if the screen is not in motion. The display panel supports a 360Hz multi-touch sampling rate and up to 500Hz one-finger touch sampling rate. The screen houses an in-display fingerprint scanner and a 10-bit color gamut.

The duo runs on the Android 11 operating system with Redmagic 4.0 skin on top. Red Magic previously featured Air-triggers for gaming. This time they made a comeback with a low input latency of 400Hz touch sampling rate.

The camera department on the rear accommodates a triple camera setup with a 64MP primary camera. An 8MP ultrawide shooter and a 2MP macro lens. The front-facing camera is an 8 MP wide-angle shooter for attending video calls and selfies.

The rear cameras support HDR for capturing pictures and have 8K@30fps, 4K@30/60fps in video recording. The cameras have CPHY-DSI Technology which increases the transmission rate for high-quality images.

The battery capacity of the Red Magic 6 Duo is 4500 mAh that supports fast-charging up to 120W via the in-box adapter. Nubia claims that the 120W fast charging can do 50% in 5 min of charge time.

Apart from these, the duo has a cooling system dubbed as ICE 6.0 Multi-dimensional Cooling System and comes with an in-built turbofan. The fan can up to speeds of 20,000 RPM to lessen the heat. The SoC has copper heat sinks that further boost cooling. 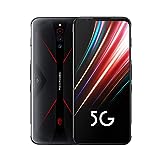