In recent times Nokia has been on a mission to expand the Lumia portfolio to cover all possible market segments. It recently launched the Lumia 925 as an upgrade to the 920 and along with it, also released the Lumia 625. The Lumia 625 has been launched as a more budget orientated device that offers the largest screen ever to feature on a Lumia device. Let’s take a look at what this phone has to offer to woo potential consumers. 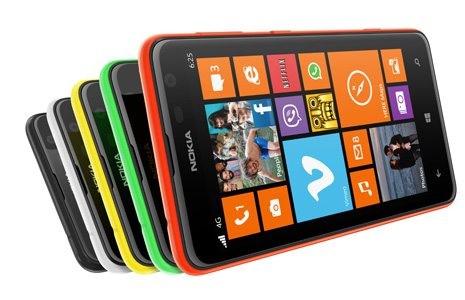 The Lumia 625 follows the design philosophy adopted by Nokia for the 820 and the Nokia Lumia 620. The 625 can be divided into two parts: the display and the coloured shell. Nokia have gone with a curved glass approach for the 625’s front. This follows the trend set by the 920 and, more recently, the 720. Next, the shell that encases the 625 comes in a variety of colours, which include orange, black, white, yellow, and bright green, and are also changeable, so you can have a different colour for every mood. With the 625 you get the best of two worlds with the premium look of the curved glass from the 720 and 920 being combined with the interchangeable colour shells featured on the 620 and 820.

In an effort to satisfy the growing demand for larger screens at lower prices, Nokia have gone for a 4.7-inch IPS LCD display running at a resolution of 480 x 800 pixels or 199 ppi for the 625. This is the first time that Nokia have introduced a display size larger than 4.5 inches and has also shown their intention to move to larger displays for their future flagship models. Consumers may be put off by the relatively low resolution display as compared to other phones in its category but the general visual optimization offered by the Windows Phone 8 OS means there is no noticeable difference to the untrained eye and everything on the screen will look sharp and clear. The display also comes with the added protection of Corning Gorilla Glass 2 that should protect the display from minor scratches as well as a super sensitive touchscreen that allows the user to use the touchscreen even with gloves on (handy for those cold winters).

Nokia, in addition to increasing the display size, have also increased the processing clock speed of this budget offering. The phone has been equipped with a dual-core 1.2GHz Snapdragon processor that is accompanied by an Adreno 305 graphics unit. While all previous budget Lumia’s featured a clock speed of 1GHz, the 625 gets its clock speed increased to 1.2GHz which should provide an added boost to its processing capabilities to ensure a fast and smooth experience. In terms of memory, the 625 comes with 8 GB of internal memory with 512 MB of RAM. Nokia have also provided a microSD expansion slot with support up to 64 GB allowing users to take advantage of the large screen to view their movies. The phone also comes with a 2000mAh removable battery allowing users to watch their videos for an extended period of time. The 625 is also the first budget Lumia device to receive 4G LTE network support. It may not be a big deal right now, with limited coverage, but when 4G becomes widely available, this device will be able to take advantage of it right out of the gate.

The Lumia 625 features a 5MP rear and a VGA front camera. The 5MP camera has become the basic feature on budget devices and will be able to capture good quality shots regularly. An LED flash has also been included with the camera, making it possible to take shots in low light as well. The rear camera is also capable of capturing video at 1080p resolution at 30fps. The 625, again, comes out superior in comparison to its other budget siblings, which are only capable of capturing video at a lower 720p.

Like all Lumia phones, the 625 has been loaded with the Windows Phone 8 OS and comes with the newly launched Amber update preinstalled. Nokia has also developed its own apps and services to take fully take advantage of the device at hand. The HERE suite of navigational services comes preinstalled and offers users an efficient mapping service, accurate navigational assistance, and a local guide service which points local points of interest. The phone also comes preinstalled with Nokia Music, which provides users with an unlimited and free access to all music. In addition to this Microsoft Office is also included for professionals looking to edit their presentations at the last minute.

The Nokia Lumia 625 enters the Indian market with a powerful set of tools, which should help it compete with the myriad of budget large screen devices being offered. The device shows Nokia’s desire to move to larger displays and to develop phones that are in tune with what a consumer needs and would want in the future.