Few Years ago, Microsoft’s Windows Operating system was meant only for Computers and Laptops. But innovations have enabled us to use this OS on our Smartphones. There are many options in the OS market to choose from. We have Google’s Android Operating System, Symbian OS, Ubuntu and Java.

It’s not the fight between Operating systems or Smartphone manufacturers, but between the innovations.

The Finnish Smartphone manufacturer, Nokia is known for its superb quality of Smartphones. If Samsung made a definition with the Android, Nokia defined Smartphones. Since last few years, however, Nokia is suffering with a problem called Samsung.

Nokia recently launched three Smartphones running on Windows Phone 8 in its Lumia Series – Nokia LUMIA 920, Nokia LUMIA 820 and Nokia LUMIA 620. Of the trio, Nokia Lumia 620 is the only smartphone falling in affordable category.

Nokia with its Lumia 620 has given a great chance to people looking for a mid range Windows smartphone that will be easy on their pockets.

Nokia Lumia 620 is a stylish and attractive Smartphone, and is referred to as the brightest Nokia Lumia by the company. This Smartphone sports a brilliant 3.8 inch Capacitive Multipoint Touch screen which produces 800 x 480 pixels resolution. The Display features Polarization filter, Light time-out, Ambient light detector, Brightness control, Orientation sensor and much more.

Nokia Lumia 620’s looks are just great. Nokia has used glossy colour scheme in this Lumia Smartphone too. The colour scheme enables you to switch between colours as per your desire. This new colour scheme will make your smartphone look different from the others carrying boring black or white colour.

For meeting high quality performance, it is powered by 1GHz Dual Core Snapdragon S4 Processor, Adreno 305 GPU and supported with 512MB of RAM. Multitasking can be done with ease on this Smartphone.

Nokia Lumia 620 houses a 5 Megapixel Autofocus Rear Camera (2592 x 1944 Pixels) with inbuilt LED flash and VGA camera on the front for Video calls. You will not miss your DigiCam with this device.

For your extra large multimedia library, this device boasts an 8 GB of inbuilt storage, which can be expanded up to 32GB using a microSD card. You can store and watch Full HD videos on this device. 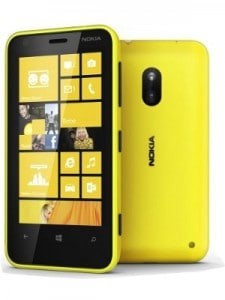 If you are thinking about the battery life, we would like to inform that Nokia Lumia 620 is fuelled by 1300mAH battery, which generates 330 hours of standby time.

Nokia Lumia 620 is a complete smartphone. Owning an affordable Windows 8 Phone is just great. Microsoft recently added tons of new Application on the Windows App Store, so that its owners don’t feel left out when compared to Google’s Play Store.

If launched at its expected price tag, Nokia Lumia 620 will give a tough competition to Samsung’s Galaxy Series and HTC’s range of Android Smartphones.