Communicating is a very basic and important part of our lives. We always communicate daily and get our work done. In today’s modern world there are loads of options to choose from if you wish to communicate with anyone. You can use calls, SMS, Email, Facebook, Twitter, WhatsApp and many more options. Out of all these WhatsApp is one application which is very much in common these days and almost everyone is using it. With the advent of this app, it is becoming easier daily to communicate. Moreover, the team of professionals at WhatsApp is always on their toes to make sure that the user gets the best interface and the features to use. For this, they have been doing their homework and have made many innovations in the current app.

WhatsApp had initially started with just text conversations which could have been possible between two users who were using the Android Platform and the internet. It had become a rage among smartphone users and this app had gained a lot of popularity in the initial stage itself. Later they made many changes to the app like calling feature, sending and receiving images and videos and other attachments. Intimating that the receiver has read the text message; along with usage of Camera and video calling facility to all users. Recently they added the Video calling facility which was a big hit among all. 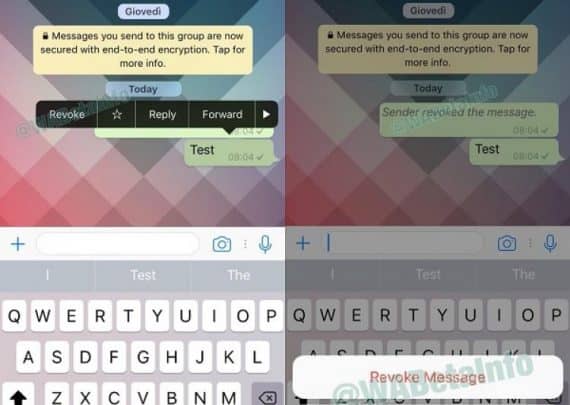 Advantages of the feature:

So basically, they are always making an innovation to the app features and make them more interactive. Recently they have been working on the new feature which will allow the users to recall the message you have sent or may be edit them as well. This facility will help the people who have mistakenly sent the messages to the wrong recipient or maybe the message was not at all expected to be sent to them. Many times, we do not want to send something to a person and in error, it goes to them causing a lot of issues and misunderstanding between each other. This feature is a great way to rectify your error and either recalls the message completely or maybe edit the portion which is not meant to be for the receiver.

How will it work?

Usually, the recall feature ensures that the sender has been allotted a time frame in which they can recall the message sent and the message will be deleted from the receiver’s phone. However, this will be within seconds of sending the text message and obviously before the receiver reads the message. Facebook who owns the messaging service has been testing this feature to be sure before it is launched. It is known that the feature is offered to the Beta users for the iPhone. However, the release of the feature for Android users is not yet decided. Users should turn on the feature manually to use it.

It is also known that apart from this feature WhatsApp is also working on the option to view the archive files like the ZIP and RAR formats. It has also started with the new feature where video streaming can be done without downloading the video which will take place in the background while the video is being played. Also, the new GIF image support is available in the attach section of the WhatsApp messenger.

All these features make it easy for the users to use the app and enjoy it to the fullest. The new feature is to revoke or edit the sent message will save you from some embarrassment where you try to hide your face post sending the unwanted message to a group or a recipient. It was then when you needed the feature most but to no avail. Nevertheless, there is always a second time and this feature will make it easy for you to amend your miss and will give you a chance to change what you have done.