Moto G Pure is a new device in Motorola’s G-series launched for the United States market. Correspondingly, Moto has even launched the E40 smartphone in Europe.

Both smartphones have a different set of specifications at an affordable pricing range. The devices will debut in the Indian markets from October 12th; as they have become official from the manufacturer a few days ago.

An Octa-Core MediaTek Helio G25 chipset powers the device along with 3GB of RAM and 32 GB of internal storage. The device has expandable storage support of up to 512GB with a provided microSD card slot.

The camera setup features an LED Flash for capturing images at night time and in low-light conditions. Also, the front-facing camera on the device is a 5-megapixel sensor with an f/2.4 aperture for selfies and video calling.

Also, the smartphone comes with IP52 certification that supports Dust and Water resistance. Besides, the battery pack is a 4000mAh cell on the smartphone with a charging rate of 10W with an in-box provided charger from Moto.

An Octa-core 1.8 GHz Unisoc T700 SoC along with Mali G52 GPU powers the device. The storage provided on the device is 4GB of RAM and a 64GB eMMC 5.1 internal storage; along with a dedicated SD card slot for expansion.

Besides, the front-facing camera is an 8-megapixel sensor with an f/2.2 aperture for selfies and video calling. Furthermore, the rear main camera of the E40 is better at night photography.

Also, the device features a rear-mounted fingerprint sensor for unlocking the device. The battery pack provided on the E40 smartphone is a 5,000mAh cell that gives a backup of up to 40 hours and supports 10W charging.

Also Read: Gaming Mouse With Side Buttons: Top 8 Picks for Every Gamer

The Moto G Pure is priced at $159.99 or Rs. 12,000 approx. and flaunts in a single Deep Indigo color variant in the US. The device goes on sale on October 14 in partnership with the Verizon network.

The Moto E40 is priced at EUR 149 or Rs. 12,900 approx. in two different colors; Charcoal Gray and Clay Pink. The availability date for the E40 is not known but the device is arriving on October 12 in India. 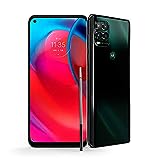