Microsoft unveils its new Surface range of hardware at its recent launch event. The tech giant has brought an upgrade to the Studio line-up of PCs. The Microsoft Surface Studio 2+ launches as the successor to October 2018 announced Studio All-in-one-PC.

The launch event featured some other Microsoft products, including the Microsoft Surface 9 and Surface Laptop 5. The upgrades found on the Surface Laptop 5 are the Intel 12th Gen chipset for faster processing speeds.

The addition of Thunderbolt 4 comes with the advantage of faster transfer speeds and 4K monitor support on Laptop 5. Besides, the Surface 9 tablet comes with upgrades such as an upgraded Intel 12th Gen Chipset and a choice of 5G Snapdragon chipset.

After two years, this new upgrade for the Surface Studio brings the same design and display but advancements in the internals. The new upgraded Studio PC’s internals comes with an Intel i7 chipset and Nvidia GeForce RTX GPU. Let’s look at the features, specifications, pricing, and availability of the Microsoft Surface Studio 2+.

The Microsoft Surface Studio 2+ sports a 28-inch PixelSense display with a screen resolution of 4500 x 3000 pixels. The display on the Studio features a regular refresh rate of 60Hz and an aspect ratio of 3:2.

Under the hood, the Intel Core i7-11370H chipset paired with Nvidia GeForce RTX 3060 GPU powers the machine. Previously, the company used the  GTX 1070 GPU on the PC, and the upgrade to RTX 3060 is a significant bump.

The physical aspects of the Studio device from Microsoft have a very identical body and display compared to the predecessor. Microsoft still uses the Zero Gravity Hinge that connects to the display. The hinge allows you to fold it down to draw or work on it conveniently.

However, the device’s weight has to change and still goes over 9Kg and above. Moreover, the thinner base that comprises the internal components is the only mentionable physical change.

Also Read: How to Install Firefox on Chromebook [Intel, AMD, and ARM]

The Microsoft Surface Studio 2+, with its all-in-one, build and swivel display featuring the Intel i7 chipset, costs $4,499.99. The machine comes in a single storage option that showcases 32 GB of RAM and 1 TB of SSD internal storage.

The Surface Studio 2 Plus will start shipping on October 25 in the United States and eventually in Europe in early November, priced at €5,589. 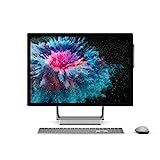 How to Recover Deleted Files from Pen Drive

How to Transfer Phone Contacts from Nokia To Android