A few weeks ago LG introduced its latest flagship Android smartphone for this year, the LG G4. It is a decent improvement over the company’s last year’s flagship, the LG G3. The G4 has a large beautiful Quad-HD resolution display and packs in a plenty of power under the hood. However, does it stand up to LG’s main rival brand Samsung’s latest flagship phablet, the Galaxy Note 4? Let’s compare the LG G4 and Galaxy Note 4 to find out in this comparison. 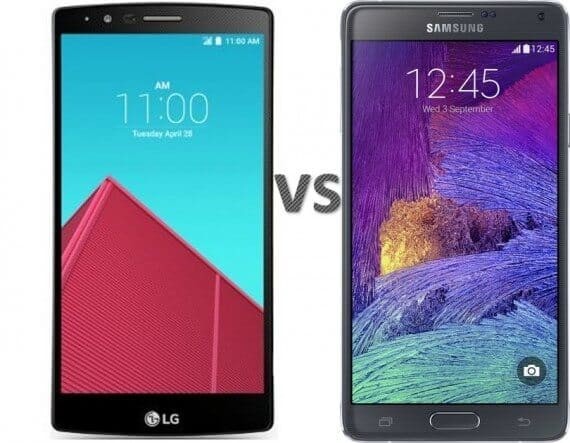 Here is our detailed comparison between LG G4 and Samsung Galaxy Note 4. Continue reading to decide which is best phablet.

The Samsung Galaxy Note 4 arrived with a better design than its predecessor, the Galaxy Note 3. The smartphone features a metal trim, and around the back has a leather-effect plastic panel. Even though the phone falls in the phablet segment, the Note 4 is easy to hold in the single hand. The LG G4 on the other hand sports a slim-arc design with a 3,000mm radius, which as per the company offers better handling. The handset is being offered in choices of handcrafted leather rear and plastic back panel. As for the dimensions, the Galaxy Note 4 offers an 8.5mm waistline and weighs 176 grams. While the LG G4 on the other hand is 9.8mm thick and weighs 155 grams.

The Galaxy Note 4 arrived last year as one of the first smartphones to boast a quad-HD resolution display. The device sports a large 5.7-inch Super AMOLED display bearing a resolution of 2,560 x 1,440 pixels, resulting into a pixel density of 515ppi. The LG G4 on the other hand flaunts a 5.5-inch Quantum LCD screen panel also bearing quad-HD resolution. However, it offers better media viewing experience with a whopping pixel density of 538ppi.

Golden Tip: How to Find a duplicate Smartphone [6 Tips]

On the storage front, the LG G4 and Galaxy Note 4, both offer 32GB of internal memory and microSD card slots to expand the memory further. The Galaxy Note 4’s memory can be further increased up to 128GB via a microSD card, while the LG G4 lets you insert microSD cards up to 2TB in size.

Also Read: How to save RAM and speed up Android Devices

For performance, the Samsung Galaxy Note 4 packs in a 2.7GHz quad-core Qualcomm Snapdragon 805 processor, which is further supported by an Adreno 420 GPU and 3GB of RAM. The smartphone offers an outstanding performance in the phablet category. The LG G4 on the other hand is backed by a newer 1.8GHz hexa-core Qualcomm Snapdragon 808 CPU, aided by an Adreno 418 GPU and 3GB of RAM. Coming to the battery, the LG G4 is backed by a 3,000mAh battery, while the Galaxy Note 4 is fuelled by a slightly bigger 3,220mAh unit. Overall, on the performance front, the G4 is a better device, but when it comes to the battery, the Note 4 beats it.

Coming to the software features, the Galaxy Note 4 was released running Android 4.4 KitKat and recently received its Android Lollipop update. The Note 4 comes with the company’s boring proprietary Touch Wiz user interface on top, which offers a handful of extra software features. The LG G4 on the other hand runs the latest Android 5.1 out of the box with the company’s latest UX 4.0 on top, which is simpler, faster, and intuitive than its previous versions. Overall, both are loaded with the latest Android version and come with several extra software features. In terms of connectivity, the Galaxy Note 4 and LG G4 offer 4G LTE support, dual-band Wi-Fi, Bluetooth 4.1, NFC, USB 2.0, and A-GPS. The G4 has some additional connectivity options including DLNA and 4K video output via Slimport.

Let’s come to the verdict of the LG G4 vs Samsung Galaxy Note 4 comparison. The former is certainly the newer of these two smartphones, and that means the handset offers a faster Snapdragon SoC, and a better front-facing camera for quality self-portraits. Then again, the Samsung Galaxy Note 4 sports a larger display and better battery life. In addition, the handset comes with a built-in stylus for multi-window operations and more, the choice is yours.

Author Bio:The author is an expert in mobile technology and loves to write about different handsets launched. He has listed the specifications LG G4 for the readers to make an informed buying decision.