Apple, in an event at Steve Jobs Theatre in Apple Park, launched the next series of iPhones. Of all the three phones unveiled yesterday (12/09/17), the iPhone X is the high-end model with some fairly new features.

iPhone 8 and iPhone 8 Plus also saw the light in the same event. However, the X edition packs in strong specifications than those two.

Apple celebrates ten years of iPhone in 2017 and that’s why they launched a special X edition smartphone this time. It sports a 5.8-inch 11225x 2436 OLED bezel-less Super Retina display. According to the reports that came out, Samsung made the display panels. In comparison with the regular LCD displays, OLED doesn’t light up black pixels, resulting in seeing the true black instead of dark gray.

Going by the leaks, the iPhone X is supposed to come up with an underneath-the-screen fingerprint scanner. We assume that they haven’t developed the technology yet. The smartphone doesn’t sport a Touch ID, but a Face ID. It uses an array of sensors and cameras with the help of an algorithm, which Apple calls as the TrueDepth to project infrared dots towards your face to map it. Moreover, it checks whether or not you are looking at the display before turning the screen off. The new Animoji helps you send your voice with the visual of an animal or a bird via iMessage.

The 64-bit A11 Bionic chip coupled with 3 GB of RAM provides the performance power to the iPhone X. There are two storage variants available (64 and 256 GB) with no option to expand it. 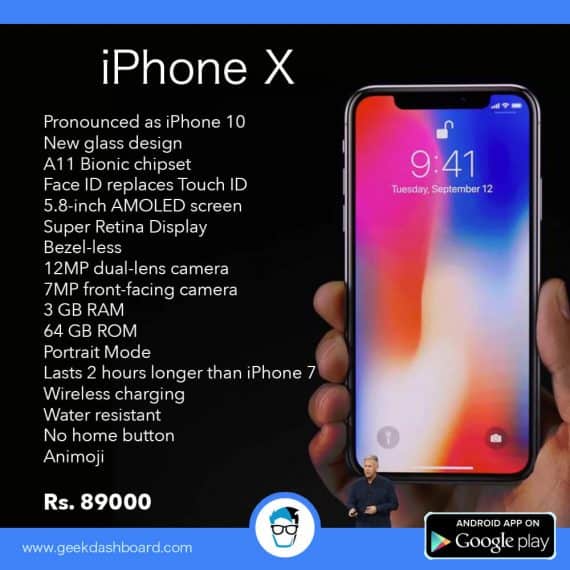 On the back, you can see the dual 12-MP cameras vertically. The lenses have the aperture of f/1.8 and f/2.4 respectively. As we saw on Note 8, this system also has optical image stabilization on both the sensors. Up front, the selfie camera features a 7 MP sensor with support for portrait mode, exposure control, and auto image stabilization.

We see the leaks suggesting the price to be at $1000 and it turned out correct. Though the device went official, we have to wait until October 27 to pre-order it. They will start shipping iPhone X from November 3. The company will sell it in 55 countries around the globe.

As stated earlier, the company launched iPhone 8 and iPhone 8 Plus in the same event. Moreover, they unveiled Series 3 Apple Watch and 4K Apple TV set-top box as well.