The ROM pack is exclusively designed for Samsung Galaxy Y GT-S5360 and you should not try it on any other device.

Keep the charging level to 70% before starting the procedure. (check this guide to improve battery life)

Make sure you take a backup of your data. Flashing Custom ROM will erase all the memory in phone/device memory.

Your device must be rooted and custom recovery must be already installed.

How To Backup Your Android Device

Step 2: Once installed, launch the application. You’ll be asked if you want to create a backup. Click on Yes.

Step 3: You can now select what you want to backup from the list. Check the ones you want to take a backup of. 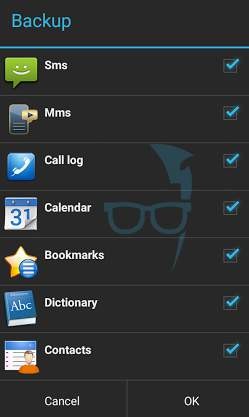 Step 4: Set the location of the backup. The best will be the SD Card (external storage). Or you can also select the cloud storage, but you’ll have to sign in with your account for that.

Step 5: After selecting, confirm it by pressing OK. The name of the backup will be shown to you on a pop up. You can simply press OK again or give a name of your choice and press OK.

Step 6: Give it some time to complete the process.

Now that you have taken a backup of your device, let’s head to our main topic to install Android 6.0 Marshmallow update on Samsung Galaxy Y GT-S5360.

Like always, there always are three simple steps to install / flash a Custom ROM on Android device. They are:

Moving onto further steps, let me not repeat again and again. I have already shared the complete process to install Android Lollipop on Galaxy Y GT-S5360. Go through the “Steps to root Galaxy Y GT-S5360” section to root your smartphone. Similarly, in the very same article is the process to install Custom recovery. Head to “Install Custom Recovery” section and follow the steps as mentioned.

Now that you have followed the instructions to root Galaxy Y and install Custom Recovery, the only thing you are left with is to flash Android 6.0 custom ROM on Samsung Galaxy Y GT-S5360.

Neither Geek Dashboard nor Developer holds any responsibility in case if you bricked your device. Proceed further at your own risk.

How To Flash Android 6.0 Marshmallow ROM on Samsung Galaxy Y

The first thing you need to do is download the required file to install Android 6.0 Marshmallow update on Samsung Galaxy Y GT-S5360. Download the file from the below link.

Once you have downloaded the file from the above link, move/copy the file onto External memory. Once you did that, follow the below steps.

Go to Advanced and do the following:

Once you are done clearing all those 3 caches. Now do the following:

Now head to, “Install zip from SD Card.” Under this, select the file you have downloaded and select it. 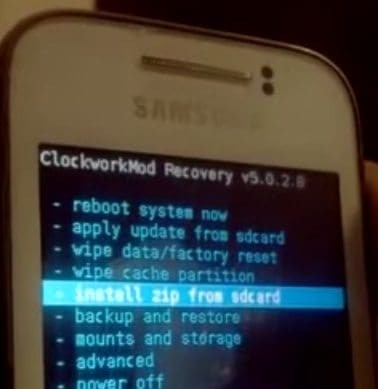 The process might take some time and after the successful installation, reboot the phone and you can see Android 6.0 Marshmallow update installed on your Samsung Galaxy Y GT-S5360.

Install GAPPS to complete the update

You’re still not done. To install Android 6.0 Marshmallow update on Samsung Galaxy Y GT-S5360 successfully, you need to do one more thing to completely complete the installation process. And it isn’t a complex thing to do. All you need to do is download and install GAPPS in Samsung Galaxy Y. GAPPS is nothing but Google Apps: like Play Store, Google +, Gmail etc. They’re not open source and hence the developers cannot put them alongside the Custom ROM. So, you have to install them separately.

The process is quite similar to installing Custom ROM which we discussed above. The only thing that changes is, you need to select GAPPS for installation in the recovery menu.

You can now restore your data which you have taken a backup of and start using your smartphone Galaxy Y on Android 6.0 marshmallow.

Secreenshots of Android Marshmallow ROM on my Galaxy Y GT-S5360

If you have any problems with the default language after installing Android Marshmallow on Samsung Galaxy Y GT-S5360 you can change it to English. Just go to menu, Click on Settings icon and navigate to “idioma y teclado” and pick “English” from the list.

The Android 6.0 Marshmallow ROM on Samsung Galaxy Y GT-S5360 seems pretty good. However, it also seems to be slow and laggy as the RAM is too low for the device. You need to be a little patient while using this ROM. Let us know if you face any issues during the installation process of Android 6.0 on Samsung Galaxy Y GT-S5360. We’ll try our best to help you out with proper solutions.