The Indian Government on Monday 29 June banned 59 mobile apps. The list also includes popular apps like TikTok, UC Browser, Shareit, WeChat, and 55 other apps. All banned apps are Chinese and the news came from the Ministry of Electronics and IT.

In the statement from the Ministry of Electronics & IT, the ministry has blocked the apps under the provision of section 69 of the IT Act, as well as provisions of the IT rules 2008. It further says these apps are engaged in activities which are prejudicial to sovereignty and integrity of India, defense of India, the security of the state and public order. 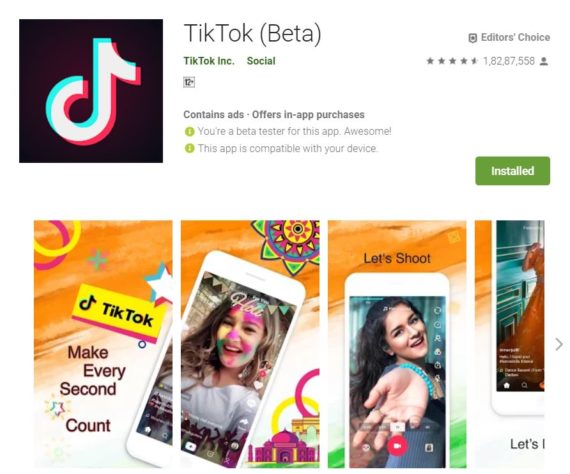 While taking a closer look at the banned application all the apps are Chinese. The list includes apps such as SHAREit (file transfer app), Shein (an online apparel retailer), Cam Scanner (popular document scanner), ES File Explorer, Clash of Kings (a strategy game), Major DU and QQ apps and more.

Here is the complete list of all the 59 banned apps.

According to MEITY, it has included descriptions from citizens to the Computer Emergency Response Team (CERT-IN) and also bipartisan concerns about apps raised both outside and inside the parliament.

TikTok users in India now can not use the app. On opening the application, it shows the popup that reads.

Dear users, we are in the process of complying with the Government of India’s directive to block 59 apps. Ensuring the privacy and security of all our users in India remains our utmost priority.

Interestingly, many companies on the list are among those which had donated in the PM Care Fund recently. TikTok had given Rs 30 Crores to the fund, whereas Xiaomi which has two apps in the list of banned apps had donated Rs 10 Crores.

To recall you, TikTok has previously been blocked in India last year and it was removed from both stores. but later it was restored.

For now, most of the apps are removed from the Google Play Store and from the App store. If you are wondering, you already have downloaded a banned app you will not be able to use it, they will be deactivated.