The Era of 21 st Century is solely dedicated to the development and innovation for the new technology. It is an integral part of the human beings and hence they are so dependent on it. Many scientists and innovators are working for the advancement of it so that it can help humans from the danger of Mother Nature. Natural Disaster is one of the causes which affects human life in many ways. Tsunami, Hurricanes, Tornadoes, and Earthquakes are some types of Natural hazards. They come without knocking the door and ruin life in the affected area. Recently, a lot of development is under process to make such tools from which we can get to know about the place before it gets hit by any of the Natural hazards. UC Berkeley Seismological Laboratory and the Deutsche Telekom Silicon Valley Innovation Centre have developed a special application named MyShake App. Officially launched in February across all platforms for Smartphones and since then it is downloaded by millions of people across the globe. 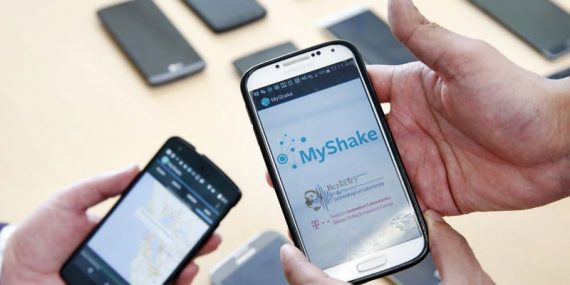 Information has been shared by the University of California that it captured an earthquake with 7.8 magnitudes in Ecuador on April 16 with only two active users, which were 170 and 200 kilometers away from the epicenter. On June 10, 103 phones recorded an Earthquake of 5.2 magnitudes in San Diego County and phones were 200 km away from the epicenter. MyShake App runs silently in the background of all the smartphones which doesn’t use much battery and sends the information to the main server which confirms the location and magnitude of the earthquake.The Main motive to develop this application is to build a worldwide network. Through this network, the center will able to collect the most accurate information about the quake and which can reduce the effects on the affected region. To make the network even stronger, developers have launched the application for iPhone Operating System. Project Leader Richard Allen, a UC Berkeley professor of earth and planetary sciences and director of the seismology lab informed that MyShake App works in real time, as it will send the information to the server, once it will activate the motion sensor but for early warnings it is still needed so much development and hard work.

MyShake Application is truly for the betterment of human beings. The Great and Innovative idea which is under implementation from months have helped the mass number of human beings by announcing the alerts through smartphone for possible quake. We all are living in the same world and this is one App that should be in every smartphone available. Maybe it will not help you but can help the person which is 200 km away who can be a victim of another quake.