In today’s world, privacy is one of the most important factors for people in regards to protecting their data and keeping it safe. Along with that, with Facebook messing up the private data of the users made it a more worrying issue for people. These kinds of data leaks and hacks are the main reason for keeping your privacy at safe hands. In the steps of protecting your privacy, a minor step would be using app lockers for Android device.

These are plenty of the app locks for Android that would provide you and your Android device privacy from outsiders that would snoop on your device without your permission.

These kinds of apps are available for many platforms and are useful in numerous ways. For example, some of the apps can be used with a PIN lock, some with alpha-numeric passwords, some with fingerprint lock, and few with facial recognization.

So, in this article, I am going to show you guys the t0p app lockers for Android to lock apps and protect your data.

Best App Lockers for Android to Protect Your Data 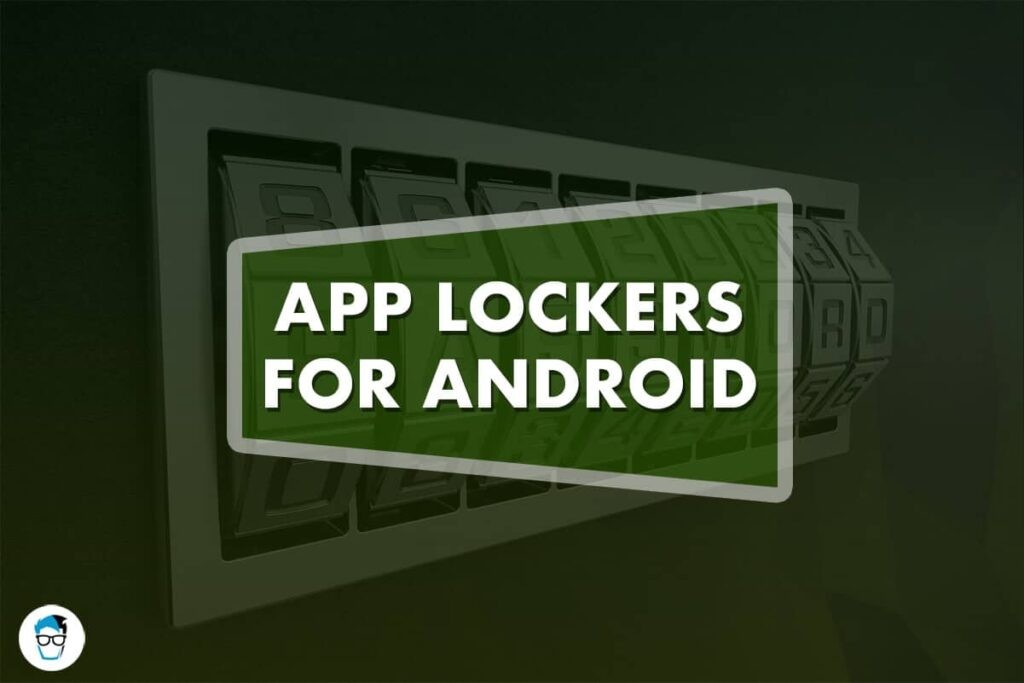 AppLock from DoMobile Labs has been the reigning champ when it comes to app lockers for Android. This reigning champion has many features that make it so desirable by so many people. Starting off, it includes the basic functions like the app-specific lock and other great features like private notifications, support for fingerprints, in-built browser for safe browsing, a vault to keep photos and videos hidden, intruder selfie which would take a photo whenever someone enters a wrong password, and many more. 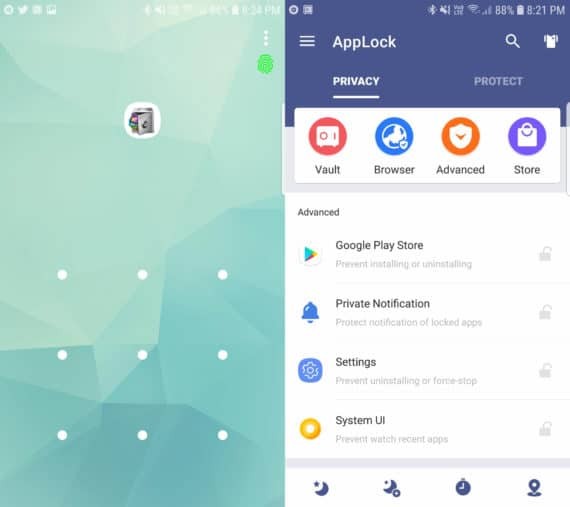 In terms of look and feel, it runs pretty smoothly across the device. When you first start the app, it will ask you to set up a pattern to lock the app itself and then it would ask you to sync your email address with the app. After that, the app is open to exploration. This app also allows various theme option for the lock screen if you are into that. You can download this app locker for Android for free and if you want more functionality, you can always buy the premium subscription either for a month or a year.

AppLock – Fingerprint is another one of the best fingerprint app locks for Android on Play Store. As the name suggests, this app allows all the basic features that you would expect like fingerprint lock on apps, scalable pattern lock that can go from a 3×3 grid to a full 18×18 grid of dots where you can create your custom pattern, fake lock window which can lock the app with a fake error dialog, and much more. 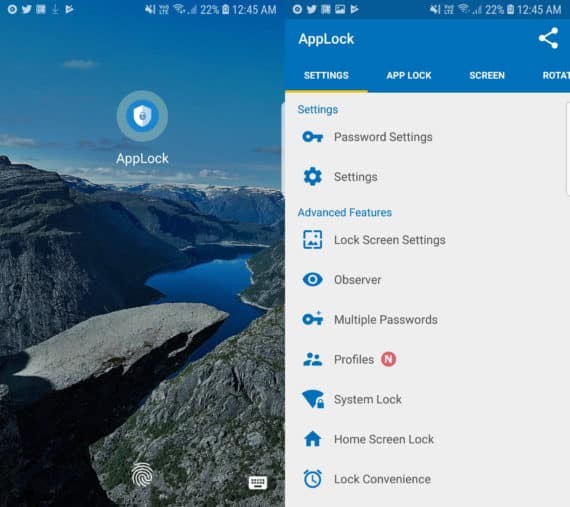 Design-wise, it is a plain, simple app with no weird visual bells and whistles. The interface is clean and easy to navigate. When you first download the app, it opens up with a start button after which you would have to set up a numeric password. If your phone has a fingerprint lock, then it would recommend you to use that after you have set up the numeric password. After that, you are good to go.

AppLock – Fingerprint by Top Droid Team is another app lock with fingerprint password functionality. This app also features the basic functions that are mentioned above like fingerprint lock for apps, option to protect your local connections like Wi-Fi, Bluetooth, a safe vault where you could safely store your photos and videos, and much more. 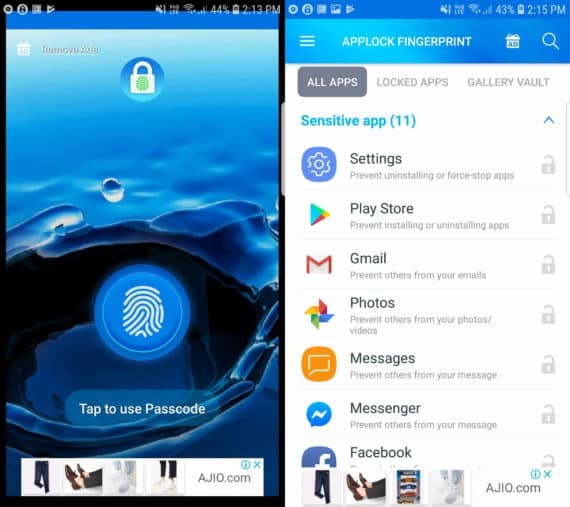 The UI of the app is very intuitive with modern design choices used in the app. Like the AppLock by DoMobile Labs, it also has the option to change the background theme of the lock screen so that you can customize and play with that.

If you are in the hunt for a simple lock app in Android, then you should check out the Norton App Lock. In terms of features, you would find that the basic features that are included in the app suffice it. It has basic features like fingerprint lock, securing apps with different passwords. Other than that,  it does not do much more. But one interesting thing is that this is the only app lock for Android without ads on our list. 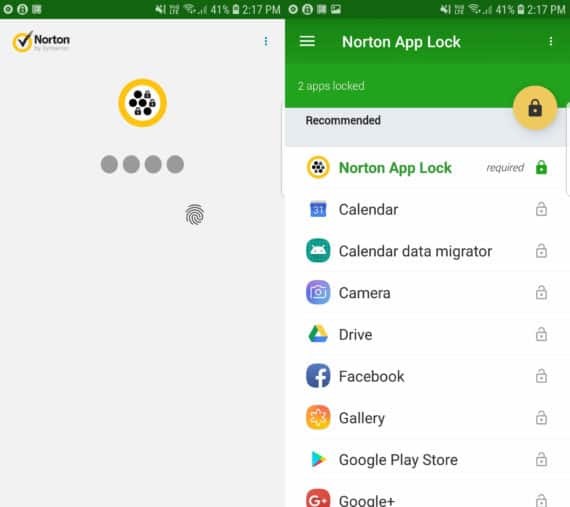 As I said earlier, this app is a simple app lock, this also goes true for the interface as well. When you download the app lock, you would be first asked to agree on the T&C’s of the app, then you would either have to set up a PIN or pattern, according to your convenience. After that, it would ask for your email id and you would be able to use the app however you want.

AppLocker by BGNmobi is another great app locker that you can download for your Android device. This app does all sorts of stuff that you would expect like pattern, fingerprint lock support for various apps, ability to prevent uninstalling apps without permission, and many more.

In terms of customization, this app offers a variety of options through which you can customize the look and feel of the lock screen. Firstly, you can change the accent color of the app according to your liking. Other than that, the app seems to be pretty easy to navigate with clear text and instructions on how to set up certain locks on apps.

If you remember back in the day, an app named Leo Privacy Guard was quite famous on the Google Play Store. Well, it is the same app that has been renamed as Private Zone Applock and now it has gained a fresh remap both functionally and visually. If you remember how the old app worked, it basically was a junk cleaner and phone booster kind of app. Now, along with that, this app now also works as an app lock. Also, few people claim that this is one of the first face recognition app lock for Android on the market but no, they are wrong. 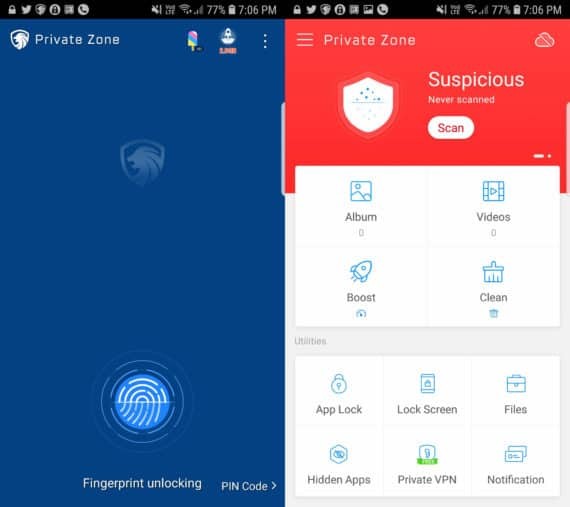 Similar to the older version of the app, the looks remain mostly the same with most of the app being blue in color. Other than that, when you first download the app, it would ask you to secure any of your photos, videos or apps after which you would be required to set up a PIN or pattern. Then you are free to explore the app.

Many people would be familiar with Keepsafe app, the app used to hide photos and videos. These guys now have developed an app lock. Feature-wise, the app has the basic app lock feature like locking the apps with different passwords and PINs. There are no other features that this app offers like vault option or ability to customize. 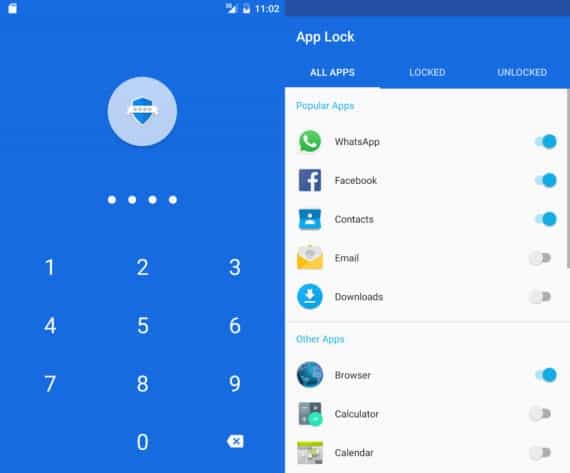 If you have used Keepsafe app before, then you would be familiar with the interface and UI. It is quite simple to use with light colors. When you download the app, it asks you to first register your account or if you have a Keepsafe account previously, you can use that as well. After that, you are required to set a PIN or pattern which would lead you to the app.

Another great app locker for Android is the AppLock from KewlApps. This app has a good set of features that includes PIN and fingerprint locks for apps, ability to lock or hide notifications from certain apps, display fake error messages and crashes to hide locked apps, timeout lock functionality that would lock out the app after some time and many more. 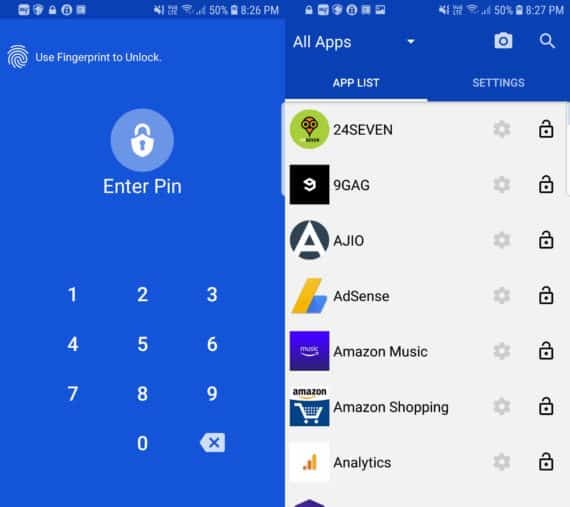 In terms of visuals, the app is made with simple colors and easy to navigate UI. The working of the app is similar to the apps mentioned in the list, i.e. first set up the PIN, then add your fingerprint and finally you are good to go.

Super AppLock is another one in the list of app lock that could be downloaded for your Android device. This app functions in the same way as the other apps that are mentioned above. It also includes features like catching the intruder i.e. if someone is snooping on your phone, it would take a photo from the front-facing camera of the device, crashing apps to prevent snoopers from using the app and much more. 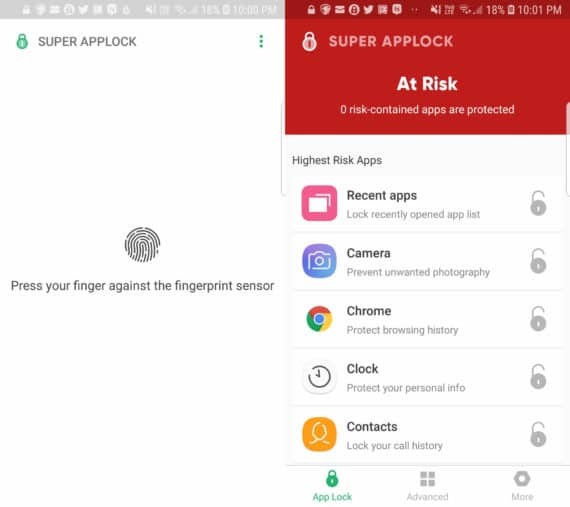 Design-wise, the app looks modern with sleek looks. When you download the app, it asks different permission for your device so that it can fully function as an app lock. Then you would be asked to set up a PIN or a pattern lock alongside the fingerprint lock. After that, you are ready to use the app.

App Locker by Kylian Mbapee (No, not the footballer!) is yet another app lock on our list which sits at a spot just above the last one. Feature-wise, it is rich with built-in junk and phone cleaner to boost the phone, locking apps with various modes, setting up themes for the lock screens if that is your taste, and more. 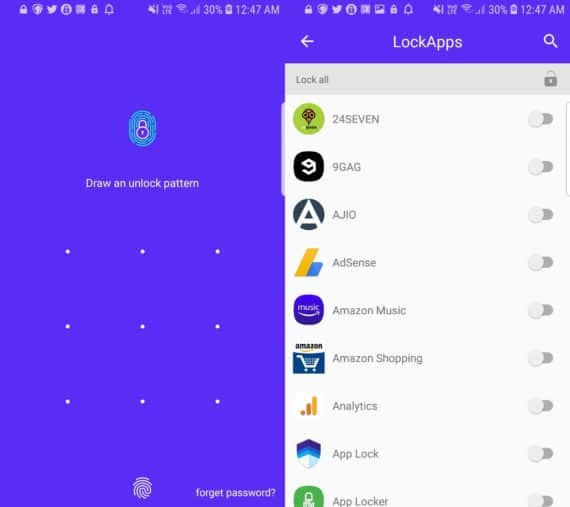 In terms of design, it looks that the developer has over-filled the app with designer buttons and looks. Other than that, the app looks good with decent enough colors and animations. As I said earlier, you can also set up different themes on your lock screen of different apps if you like that kind of stuff.

The last one on this list in the Perfect App Lock by Morrison Software. This main features of the app include applying different kinds of methods to lock apps on your Android device, catching people who snoop on your phone using the Watchdog feature of the app and much more. 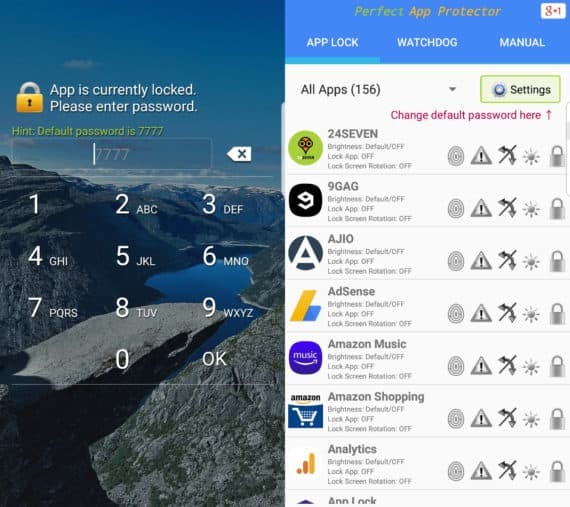 In terms of User Experience, this is where this app lacks behind from the others mentioned in the list. The looks and theme of the overall app look very dated and old-school if I must say. The icons that they have used to display certain things, the overall color scheme of the app looks like it was made in 2010. But if you just want the functionality, then this app would also get the job done.

So, here is the list of the best app lockers for Andriod that you could find on the market. The list above features various kinds of smart app locks like the AppLock from DoMobiles which has been the best app lock for Android so far, the Norton App Lock which does not foster ads, and many more.

Other than that, there are some apps that offer additional functionality as well, for example, the Private Zone Applock offers device cleaner and booster along with its app lock which could come quite handy to some people.

Every app lock that I have mentioned here has a download link so you can download those app lockers for Android devices directly from the Play Store.

Did you think I missed any app lockers for Android? Do leave them in the comments below with your feedback.