Asus Vivobook 13 Slate 2-in-1 notebook announced with pen support and an OLED display in the United States. This newly launched 2-in-1 device from the Taiwanese brand features a detachable keyboard as well.

The Vivobook comes with support for Asus’s proprietary Pen 2.0 and comes with a magnetic pen holder. Also, the device comes in three different editions powered by Intel Chipsets.

Additionally, the screen is a 16:9 aspect ratio display that has TUV Rheinland eye certification and a 0.2ms response time.

An Intel Pentium Silver N6000 processor powers the 2-in-1 notebook coupled with Intel UHD graphics with up to 8GB of RAM. The onboard storage of this 13-inch device from Asus is up to 256GB with microSD card support for expandability.

Besides, the camera modules on the Vivobook 13 feature a 13-megapixel rear camera and a 5-megapixel front-facing camera for virtual meetings and capturing pictures.

The device runs on Windows 11 Home out-of-the-box and the device is suitable for casual browsers; and students for online classes and mini-projects.

Also, the Asus Pen 2.0 stylus is an added edition for the setup that comes with four swappable pen tips. Furthermore, the 2-in-1 has not compromised for the media-centric audiences and provided a Quad-speaker setup that supports Dolby Atmos and Smart Amplifier technology.

Also Read: How to Bypass “Your Connection is Not Private” Error on Google Chrome and Microsoft Edge

The connectivity options on the device include two USB ports, an SD card slot, Wi-Fi, Bluetooth, and a 3.5mm headphone jack. Besides, Asus has provided a fingerprint sensor combined with the power button; that enables quicker unlocking while booting up the device. Moreover, the battery capacity of the device is a 50Whr cell that supports a USB Type-C; 65W AC fast charging adapter.

The Asus Vivobook 13 Slate 2-in-1 comes at a price tag of $599 for the base storage from the line-up. Furthermore, Asus is provided the notebook in three different editions that include two Artist Editions.

These are designed in collaboration with Steven Harrington and Philip Colbert, flaunting modern pop culture. Additionally, Asus is bundling the package with a keyboard cover, kickstand, and the new Asus Pen 2.0 stylus. 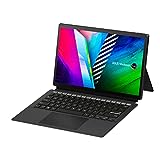