Asus has announced its new edition in the TUF gaming laptop series. The Dash F15 features the latest 11th-generation Intel Core H-series processors under the hood. Besides, It has a rugged body with a military-grade build. The laptop originally debuted at the CES 2021 event that took place in January. The certification for the military-grade given is a MIL-STD-810H.

The TUF Dash F15 gaming laptop has a dual-fan channel air cooling system that throws out heat using four outways. Moreover, there are three different modes for different types of use cases known as Scenario Profiles. Turbo Mode basically is for intensive tasks. A Performance mode that optimizes speed and fan noise and a Silent Mode for lighter tasks. This mode reduces both power and noise on the internals of the hardware.

The Asus TUF Dash F15 sports a 15.6-inch full-HD IPS display that supports a refresh rate of up to 240Hz. The display supports a 100 percent sRGB color gamut and 3 milliseconds of response time. An 11th-generation Intel Core i7-11370H processor powers the laptop. It has 32GB of DDR4-3200MHz RAM. The GPU on-board is an Nvidia GeForce RTX 3070 GPU clocked at up to 1390MHz with ROG Boost at 80W.

The TUF Dash F15 runs on Windows 10 Home Operating System out of the box. The storage options on this gaming beast are up to 1TB with M.2 2230 PCIe SSD which is quite fast. In addition to that, Asus provides an SSD slot to expand the storage further by unscrewing the bottom of the laptop.

The other connectivity features of Dash F15 are Bluetooth v5.2 and Wi-Fi 6, three USB-Type A (3.2 Gen1) ports, as well as a Thunderbolt 4 port and an HDMI 2.0 port. The keyboard of the device is a backlit module that has 1.7 millimeters of travel distance in a Bolt-blue color LED backlight. The battery capacity of TUF Dash F15 is a 76Whr battery with a 200W power adapter and 100W PD charging support.

The Asus TUF Dash F15 Gaming laptop starts at a price tag of Rs. 1,39,990 for Eclipse Grey color. The Moonlight White color option has a price tag of Rs. 1,40,990. The sale for this gaming laptop is scheduled to take place at the end of March. The laptop will get available on Flipkart and Amazon, as well as Asus Exclusive Stores. ROG Stores, and other offline stores in India. 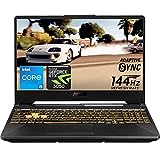