Asus ROG Zephyrus series has a couple of new additions in the line-up for global markets. The company has announced its new ROG Zephyrus S17 and ROG Zephyrus M16 models.  Asus hosted the event virtually – “For Those Who Dare.”

The newly launched devices feature the latest 11th Gen CPUs from Intel H-series. Moreover, the GPU of these gaming laptops is from the Nvidia GeForce range.

The GPUs provided by Nvidia for the Asus ROG gaming laptops are GeForce RTX 3050 Ti and GeForce RTX 3050 Graphic cards. Furthermore, the same graphic sticks are available on the other gaming series laptops from Asus.

The Zephyrus S17 sports a 17.3-inch QHD DDS panel with a 165Hz refresh rate for a smooth gaming experience. The 11th-Gen Intel Core i9-11900H processor powers this gaming laptop. The processor is capable of using up to 90W of power in short intervals.

The storage options provided by Asus are 16GB of RAM with up to 2TB SSD storage. Tagging along is an Nvidia GeForce RTX 3080 GPU with support for Dynamic Boost using up to 140W power.

The ROG S17 gaming notebook features a new AAS Plus cooling system. This new cooling system is a rising optical-mechanical keyboard for better heat dissipation. The system lifts the keyboard at a 5-degree angle, opening wide which allows the pull of cooling air into the laptop. The new Arc Flow fans fitted below those vents from the cooling system quietly pulls the air for fewer heating issues.

The battery capacity of the S17 gaming laptop is 90Whr substantial cell. The battery supports a 100W fast-charging support that can charge the cell up to 50% in just 30 minutes. The USB Type-C port is provided to support those enormous fast charging speeds.

The Zephyrus M16 features a 16-inch WQHD display within a slim and compact design of a 15-inch chassis. The display supports a refresh rate of 165Hz with a 3ms response time. The M16 has an Adaptive-Sync panel with a 16:10 aspect ratio that generates Pantone-validated colors. The Dolby Vision support and cinema-grade DCI-P3 color gamut is a bonus for the display. The laptop even has Dolby Atmos support with a six-speaker system.

The speaker system with dual force-canceling woofers enhances the sound quality even further. The microphone system is a 3D-array technology for clear audio and two-way AI noise cancelation. Moreover, an 11th-Gen Intel Core i9-11900H powers the M16 gaming notebook. The GPU stick provided on the ROG Zephyrus M16 is a  GeForce RTX 3070 or new GeForce RTX 3050 Ti GPUs. The storage options are up to 48GB of RAM with up to 2TB of SSD storage.

The battery capacity provided on the ROG Zephyrus M16 is a 90Whr battery cell with fast charging support. The fast charger provided can charge the device up to 50% in just 30 minutes. Besides, the keyboard setup provided is a Stealth Type keyboard with a one-zone RGB or white backlight.

The Asus ROG Zephyrus S17 and M16 prices have not yet been announced by the Taiwanese manufacturer. The prices of these new fully featured gaming laptops may differ from region to region. The manufacturer has already launched a couple of TUF series laptops recently in March for India. Asus may not bring these newly announced gaming notebooks to India in the coming future. 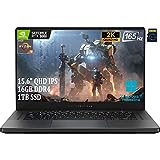