Apple launches the new MacBook Pro 2021 models globally with their latest and most powerful chipsets; M1 Pro and M1 Max. The new chipsets unveiled by the tech giant bring a new leap of performance; with efficient battery usage on the new MacBook Pro models.

The new chipsets from Apple are giving a run for their money; providing greater performance in comparison to the Intel chipsets on other laptops.

This new launch from the company is a much-awaited upgrade for many Mac enthusiasts with a new design after almost 5 years. Apple has brought its notch design from iPhone to the MacBook which has mixed reactions from users with the functionality as it doesn’t feature FaceID and only works as a webcam.

Besides, Apple has announced the new 3rd generation Airpods and new color options for the HomePod mini.

The new MacBook Pro 2021 edition comes in two different sizes which are 14-inch and 16-inch models with narrow bezels and a notch for the webcam. Moreover, the display used is a mini-LED Liquid Retina XDR display; that supports up to 1,000 nits of full-screen brightness, 1,600 nits of peak brightness.

Apart from this, the display comes with a P3 wide color gamut, HDR support, and XDR output; a 1,000,000:1 contrast ratio, and up to 120Hz of high-refresh-rate ProMotion technology.

Also, the notch featuring the webcam is now upgraded to a 1080p resolution camera; which is a good thing as the previous models had a 720p lens with quite a mediocre performance. Under the hood, Apple has upgraded the M1 chip with two fresh Silicons namely M1 Pro and M1 Max.

Whereas, the M1 Max comes with a 10-core CPU similar to the M1 Pro but doubles the graphics power with up to 32 cores. Speaking of the upgrade, the M1 Pro gives a 70 percent faster CPU performance and 100 percent more GPU performance.

Besides, the M1 Max outperforms every other chipset out there in the market; providing up to 400GB per second of memory bandwidth which is a 100 percent upgrade from the regular M1.

Also, the keyboard on the MacBook Pro this year has received quite some changes that include physical function keys and a wider escape key with the TouchBar removed from the Magic Keyboard.

Finally, Apple has listened to the woes of customers and brought back a few of the most needed I/O ports. These ports include an HDMI port, an SD card slot, Lightning USB Type-C Ports; a 3.5mm headphone jack, and a MagSafe port for charging.

The speakers set on the new notebooks from Apple feature a six-speaker sound system that supports Dolby Atmos and Spatial Audio. The connectivity options on the new MacBook Pro feature Wi-Fi 6, Bluetooth V5.0, and users have the vicinity to connect up to three Pro Display XDRs and a 4K TV simultaneously with the provided lightning ports. 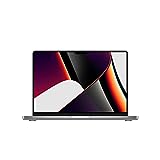