Tablets are super useful devices that can make a big difference in your day-to-day productivity. However, due to being somewhere in between a laptop and a smartphone, and seeing as most people own both a phones as well as a PC, tablet owners are a bit unsure about the exact use and the role of a tablet in their lives.

Not to mention, at least in India, tablets often get the short shrift in terms of customization. Most apps seem to be directed at phones, leaving one wondering what are we supposed to do with our tablets!

If you are tired of the plain Jane straight-out-of-the-factory look of your tablet, and want to turn it into a stunning looking device as well as make the most of its potential, all you need to do is customize it.

I have been using a Samsung Galaxy Note 10.1 (the 2012 edition) for more than a year now and have become a bit of a pro at handling these things. Here are some of my tried and tested ways of customizing an Android tablet beautifully.

^Yes, that is an Android tablet home screen

Don’t settle for the stock Android experience if you’re not too fond of it. If you own a Samsung device and are sick of their bland TouchWiz U/I, or own a Nexus tablet and are craving a different look, the best way to get it is to download and run a launcher.

A launcher basically replaces your existing home screen and app drawers, which completely changes the look of your tablet.

Some of the best launchers in the business are:

There are plenty more launchers with new ones hitting the market every week. I personally run Nova Prime and have stuck with it because:

There’s a lot you can do with a custom launcher. If you get too used to any one launcher and start craving another look, all you have to do is download the launcher of your choice and run it. It will replace your existing launcher with ease. And if you want to go back to your original U/I, just change the settings or uninstall the launchers. It’s as simple as that! 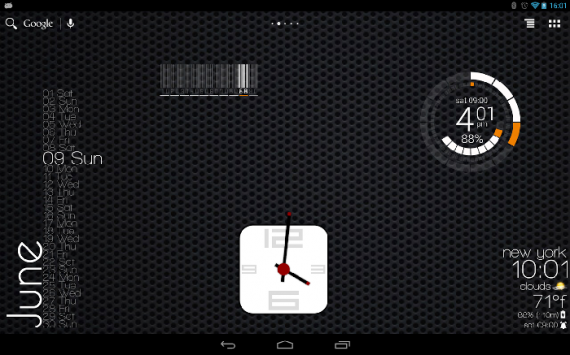 While launchers customize your home screen and interface, widgets customize the look of your apps and shortcuts.

Third-party widget apps give you a lot many customization options. I use Zooper to create on my home screen huge shortcuts (widgets) to my photo gallery. It runs slide shows of my most favorite images out of my huge collection of photos, which is a delight every time I look at my home screen.

Organize Your Apps in Dedicated Folders

If you have a ton of apps on your tablet (which you must if you are to make the most of it!) you should also organize them well or it will be a nightmare for you finding the relevant app each time.

App organizers allow you to create folders as per your requirements and put all the related apps in their dedicated folders.

For example, on my tablet with the help of the aptly-named Folder Organizer, I’ve put OneNote, Evernote, Diaro, and all other note-taking apps in one folder.

Similarly, camera apps, since I’m an enthusiastic snapper, and e-book apps have their own folders. It makes accessing my most favorite and most frequently used apps a breeze. Each time I download a new app my app organizer prompts me to choose a label for it and assign it a folder accordingly. It saves a lot of clutter and a lot of time. What can I say, I like my tablet organized!

In Android KitKat devices, you can simple tap hold and drag an icon on home screen to other icon and it will automatically create folder. You can add as many apps in same folder and even you can name it your own.

Must-Have Apps on an Android Tablet 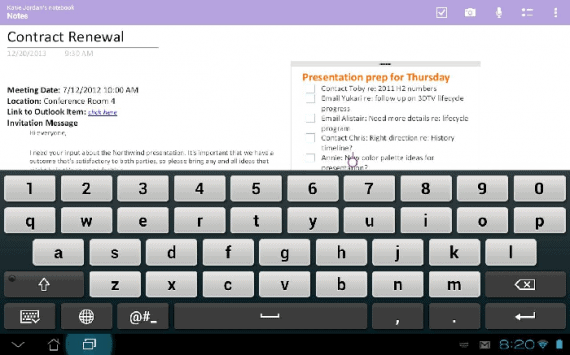 While I realize that “best” differs from person to person and depends on your needs, I’d like to stress that the best apps for tablets would be those that make the most of a tablet’s biggest weapon – its generous screen real estate.

The big screen, the great resolution, and the easy to use keyboard all make the following must-haves in a tablet.

This is tailormade for tablets. Save your favorite images to your device, pull out widgets that display these images in real time slide shows on your home screen, and have a fabulous looking tablet, unlike anyone else’s on the planet!

Want to access or edit your documents on the go? Google Drive is your friend!

The best note-taking app, period! Even better than Evernote now that it has introduced the ‘Clip to OneNote’ feature and seeing as it is free, unlike Evernote.

Typing on a tablet is a lot easier and comfortable as opposed to on a smartphone, so make the most of your tablet by installing this wonderful note-taking app.

This is one of the best photo and video gallery apps in the Google Play Store. A fantastic and breezy way to access hundreds of photos and videos stored in your tablet, along with a pleasing interface. If you’re unhappy with the default photo gallery app your tablet came with, you might want to give this a try.

I could go on and on, but you get the point. Keep hunting for apps that make the most of your tablet’s strengths!

A Word on Rooting Your Tablet

I look at rooting as the last option, though it is guaranteed to give you a lot more control on your device. The reason being that rooting is only for those who display a more than basic understanding of how smartphones/tablets and their operating systems work and how they can root their devices to customize them to their tastes and needs.

There are a number of videos and tutorials available online explaining how to root your device, and while rooting isn’t exactly rocket science, I’d suggest you stay away from it unless you know what you are getting yourself into.

There are many other non-drastic ways of customizing your Android tablet, as mentioned above. Start with them and take it slow. Try out different apps and settle for the ones best suited to your taste. Smart, practical, and informed experimentation is all it will take!