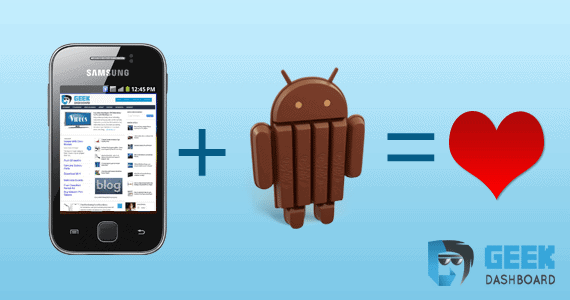 At the end of this article, i even provided Android 4.4 Kitkat feel Launcher, which is one the best launcher for Android devices. By using this ROM and Launcher together, you’ll get perfect Android 4.4 KitKat on Samsung Galaxy Y GT S5360 in look.

Please note that, This is not an official update, it is just a ROM developed by Android geeks. This ROM will only make you feel the difference. Neither Geek Dashboard Nor Developers are responsible in case of any damage to your mobile. Try this at you own risk.

As I promised above, in this article i will guide you to get Android 4.4 KitKat on Samsung Galaxy Y GT S5360 by making use of custom ROM. Although it is not an official version, but it looks as same as original KitKat version. Before proceeding to the guide to get Android 4.4 KitKat update on Galaxy Y mobiles, let me say about few pre-requirements

In order to get Android 4.4 KitKat update on Samsung Galaxy Y GT S5360, you should immediately download all three below mentioned stuff. Either download them directly to your mobile or download them to your desktop and later copy all those three files to mobile.

Download KitKat Launcher from below link, and you’ll see three .APK files in it. By making use of some file mangers, install those 3 apk files in this order (PrebuiltGmsCore.apk, Velvet.apk and GoogleHome.apk). Once installed, simple select the launcher by pressing the “Home” Button.

That’s it, First boot may make several minutes; so keep your patience. Once booted successfully, you’re set to enjoy Android 4.4 KitKat on Samsung Galaxy Y GT S5360. In case if you brick your mobile during this procees, you can unbrick Samsung Galaxy Y S5360 easily. So worries; Make use of below comment section for any instant help.